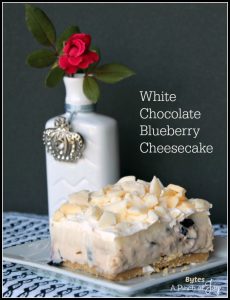 When Bytes cousin was visiting several weeks ago, she challenged him to try a recipe for White Chocolate Blueberry Dessert she thought sounded really good.  He got the ingredients and “aged” them in the pantry.  The fruit was used in another recipe but a second container was later purchased and waiting in the fridge.  Then Wheels asked Bytes last Friday if he wanted to come along for a dinner out to celebrate my birthday.  He said yes, and then committed to making a dessert for after dinner.  It was a celebratory dessert worth waiting for! Bytes tweaked the recipe and took photos of the process – a creative bloggy birthday gift.  :-) My sister and mister joined us for dessert later in the evening.  Their card said “I wish you a day full of smiles. . . “    That dessert was certainly ... END_OF_DOCUMENT_TOKEN_TO_BE_REPLACED