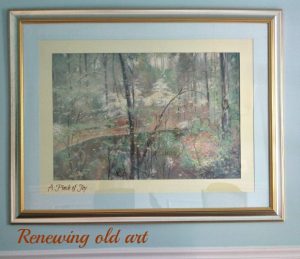 How to make old art new again.  And make it coordinate with new room colors.  And do it quickly,  easily and at almost no cost.   That was the challenge in our dining room makeover.  I found this picture at a garage sale a few years ago.  Someone was selling off the almost new contents of their office,  including artwork.  This reminded me of a spot in one of our favorite hiking areas, a place called Highbanks,  in the spring time.  When I got it home, the title of the piece is “Spring”.  It’s pretty good sized - 48 inches by 38 inches -  and very heavy.  For a while it hung in the living room.   However, a perfect spot opened up when we did the dining room.  Except  the mat colors made it look way too heavy for the light, airy and meditative vibe I was going for.   Plus I didn’t think ... END_OF_DOCUMENT_TOKEN_TO_BE_REPLACED 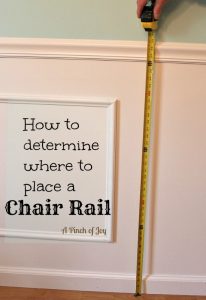 A chair rail adds interest and polish to any room, bringing instant character and definition.   The term may have originated from the Shakers who used rails with pegs to hang chairs so floors could be easily swept.   Many people think they are  intended to protect the wall from backs of chairs that were pushed up against it and they do sometimes serve that function.  However as far back as the Romans, wood pieces have been most frequently used to divide walls  for design and architectural interest. But how do you know where to place the chair rail on the wall?  Is one place better than another?  I am so glad you asked!!!!  Because there are answers. Ancient Greeks searched for mathematical formulas to determine the perfect number, perfect chord, and points of  perfect balance in ... END_OF_DOCUMENT_TOKEN_TO_BE_REPLACED 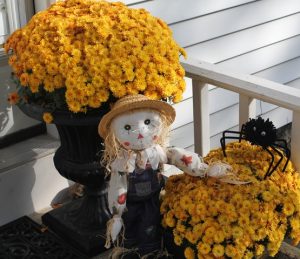 We replaced our faithful olllllld computer yesterday.  It was a lot more fun finding and buying the new one, than it is getting all the information transferred over to it.  I was shocked at how much had accumulated and deleted a bunch, but still the chore has kept Bytes busy all day -- and me too!  But it was a beautiful day to snap some pictures of the front of the house to share with you.  It's fall and we're getting in the spirit -- cue spooky music ~~~~~~ The onion headed gardener tends . . . the gardens at the Spooky Birdhouse! And that's about as spooky as it gets at Chez Charlene this time of year! Scarecrows and spiders . . Pumpkins and ghostly boos. . . . A wreath to welcome you. . . . . . and the fairies, too! Don’t miss a thing — subscribe by email or RSS ... END_OF_DOCUMENT_TOKEN_TO_BE_REPLACED 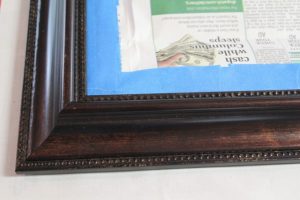 Frame too dark for the space - a windowless bathroom.   The solution to the problem!   Two coats of silver paint later.   A much needed pop of color framed in silver brings light to a dark space and coordinates with the silver accessories elsewhere in the room! ~~~~~~~~~~~~~~~~~~~~~~~~~~~~~~~~~~~~~~~~~~~~~~~~~~~~~~~~~~~~~~~~~ March recap: Organize Your Financial Paper Series:  Use the documents gathered for filing your income tax return in Part 1 to prepare for emergency in Part 2, to set financial goals and plan ahead in Part 3.   More installments coming. Recipes:  Four Bean Salad, No Bake Easy Cheesecake,  Chicken Curry and Fruit Salad, and Wicked Simple Sweet Slaw. Linking up to these awesome parties here and ... END_OF_DOCUMENT_TOKEN_TO_BE_REPLACED

Wheels is a rock star when it comes to choosing cards!     We became officially engaged on June 10 - my parent's wedding anniversary.  We were apart for much of our engagement, but on the tenth of the month without fail I would receive a "monthiversary" card from him.  And after we were married, the sweet, heartfelt cards continued four times a year.  My birthday, our anniversary, Christmas and Valentine's Day.   I treasure every one -- but I never go back to reread them and they are usually in a box in the closet.  And this year, I decided the Valentine cards deserved to be showcased! I went through the box and chose nine cards about the same size and with a white, gold or red color theme.  Then I punched a hole in the corner and tied each card onto a Christmas string of red beads.  I ... END_OF_DOCUMENT_TOKEN_TO_BE_REPLACED 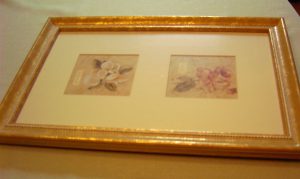 Start with a Nineties style flower picture with mottled gold frame . . . . Turn picture over and remove dust cover.  If  you are lucky, enough of it will remain to use as a pattern to replace it  :-) Completely disassemble the picture, being careful of glass.  Save backing cardboard. Spray frame a matte nickel color because it coordinates with another frame in the same area. Center black and white photos in mat.  Reassemble by turning frame upside down, insert glass, mat with photos, backing cardboard and carefully trimmed and glued dust cover. Hang in place on a soft butter colored wall.  Cringe every time you pass by - a dozen times a day because the nickel color does not provide enough contrast to the wall.  Or the black and white photos. Remove pictures and live with a bare wall ... END_OF_DOCUMENT_TOKEN_TO_BE_REPLACED