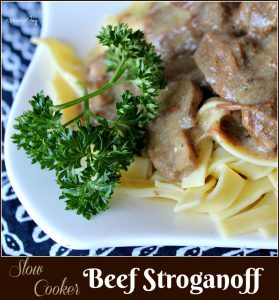 Beef Stroganoff is a simple dish of meat and mushrooms with a sour cream sauce that literally has been around for centuries.   Eventually it was given the name of the Russian Count Pavel Stroganoff.  Stroganoff, was a celebrity in turn-of-the-century St. Petersburg, a dignitary at the court of Alexander III and a gourmet. He entertained frequently and beef, onions and mushrooms in a savory sour cream sauce became a signature dish bearing his name.   However, his Beef Stroganoff was likely served over potatoes rather than noodles.  Beef Stroganoff has many variations and here is one more! This is a quick and easy version of Beef Stroganoff for families on the go.  It takes about 10 minutes to put together, using cubed stew meat.  You can use frozen diced onions to shave off a couple of ... END_OF_DOCUMENT_TOKEN_TO_BE_REPLACED 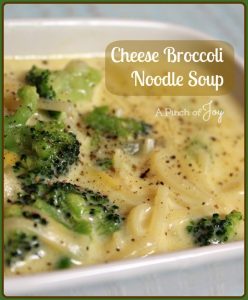 Donna asked me if I had ever had a recipe failure.  Hmmmm – more than a few!  I said I had never been able to make a good broccoli cheese soup even though I'd tried several different recipes.   Donna said “I have a recipe that  you’ll love and it won’t fail!”  She sent me this tried and true broccoli and cheese noodle soup from her recipe box.  She was right.  It was a hit!   I would never have thought of adding noodles to a broccoli cheese soup but it is so good!  The unexpected noodles bring it to a “stick to the ribs” category of yummy.   She made a note to make sure the noodles are extra fine – around an inch long and smaller than the diameter of thin spaghetti.  I did cut the recipe in half to make six servings – one meal for the three of us.  And instead of water and bouillon ... END_OF_DOCUMENT_TOKEN_TO_BE_REPLACED