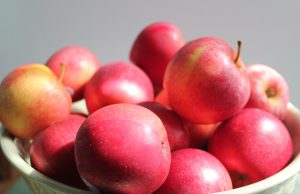 What do the month of October, John Chapman and Steve Jobs have in common?

Give up?   October is Apple month.  John Chapman is better known as Johnny Appleseed.  Steve Jobs founded a company named Apple.  The answer is that they have apples in common.   But there’s more . . .

John Chapman was a nurseryman with a vision.  Settlers were moving westward into the Ohio Valley.  Apples were essential to life in the frontier and in some places having an orchard was a prerequisite to land ownership.  John  made it his life’s mission to provide this essential fruit to pioneers. He planted nurseries, fenced them off from livestock, left a neighbor to sell them after a season or two while moving on to plant another nursery. He moved ahead of pioneers into areas where he thought they would settle.  His life was simple wilderness survival.  He owned little, not even the apple seeds he obtained from cider mills in Pennsylvania.  The prices he charged for his saplings were small and it was well known that he gave away seeds and saplings to those who could not pay.   He became more eccentric as he grew older and we have the stories of his cooking pan hat and wild appearance.  He remained a gentle man, concerned for all creatures.  It was his vision and his focus that allowed him to provide the means for thousands of people to have better lives.

Steve Jobs didn’t have much focus or direction in his life until he met Steve Wozniak at a computer club meeting and the two began experimenting together.  Jobs saw the potential in the results of their work and began to develop a vision and then to focus on that vision. He insisted that the end product must be accessible by anyone, not just an elite few.  Keeping to that vision, the machines eventually produced were smaller, cheaper, intuitively easy to use and could be purchased at a local store.  The company went on to introduce revolutionary products and in doing so,  dictated the evolution of modern technology.  No one knew the potential, or even the need,  for the idea behind such things as the iPod, iPhone and other things, but it is difficult to imagine life without them. The computer is the first thing to come on in the morning and the last thing off at our house. Actually with six of them and people coming and going at all hours for work schedules, there is usually always one or two running.  Because of Steve Jobs’ vision and focus, people all over the world have had their lives changed for the better.

This essay grew from an appreciation of apples in honor of apple month to a connection with the two gentlemen after hearing the news of Jobs death.  As I researched, turns out I was not the only one to connect them.  Apple  played off the Johnny Appleseed connection in their early ads.  And Jobs made one of the points I was aiming for when I started this when he said  “Here’s to the crazy ones, the misfits, the rebels, the troublemakers, the round pegs in the square holes… the ones who see things differently — they’re not fond of rules… You can quote them, disagree with them, glorify or vilify them, but the only thing you can’t do is ignore them because they change things… they push the human race forward, and while some may see them as the crazy ones, we see genius, because the ones who are crazy enough to think that they can change the world, are the ones who do.” – Think Different, narrated by Steve Jobs

And what does this have to do with A Pinch of Joy?  It brings joy into our own lives when we think outside the box in order to see the potential.  Standing true to our vision may bring hardships, but it can be wildly rewarding.  And most importantly,  keeping the welfare of others in view, not only brings joy, it changes the world as we know it.

Back to school - celebrating milestones
Swedish Chef Popcorn shrimp
Do not try this at home!
Liebster Award and getting personal . . . .
Five Steps out of Depression: How to find peace and hope again
Rocky the Cat
What is Joy?
10 Things I learned while on summer vacation