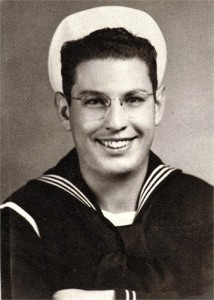 He was twenty years old when he moved to California.  With fresh training in the exciting new field of aviation, he was thrilled with his new job at an airplane manufacturer.  His letters back home told of his apartment,  friends, exploring his new city and a new car.  Then they began to take an anxious tone. Buddies enlisted and were drafted.  He resigned his job, and took a train back home to enlist in the Navy. On his twenty-second birthday, he joined his siblings and parents for a family portrait.  He was already wearing the Navy uniform and would ship out the next day.  His mother’s smiling face betrayed none of the fears she must have felt. His father’s  face was very sober.

His letters back home continued in regular rhythm, notable for what they do not say.  He could not reveal that he was first in Africa and then, in stormy seas, awaiting the order to invade Sicily.  He was a coxswain, pilot of the landing craft that moved fighters from ship to shore.  Seated high above the craft, coxswains were sitting ducks.  He survived, many of his buddies did not.  The landing craft were redesigned and the next time he waited for an invasion was in the Pacific theater. There he was in five battles, including one on Thanksgiving Day.

He married, became a successful farmer, and a respected member of his community. His only son was named for the man who saved his life three times.   He seldom spoke of the horrific scenes tattooed on his brain. Forty years later, he would say that he finally had a Thanksgiving without nightmares and could enjoy a dinner without choking it down.

The politics of the world change, names of the conflict and locations vary, equipment and techniques advance.  But  the sacrifice of individuals, in their time and place,  has shaped our country for more than two hundred years.  Thank a veteran today.