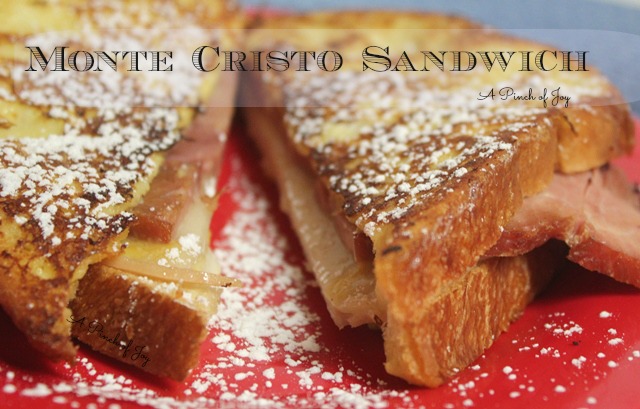 The Monte Cristo sandwich  is based on a similar sandwich called Croque Monsieuer –  basically a grilled cheese sandwich.  When it appeared in American cookbooks in the 1930’s, it was known as French sandwich.  Then someone came up with the idea of combining those two “French” dishes – French sandwich and French toast – into a Cheese Dream Sandwich. The idea of serving it with jelly came from the French Toast connection.  King’s Restaurants in Nebraska carried the idea further by deep frying the sandwich and calling it a Frenchee.  But it’s real claim to fame was in the mid Sixties when it appeared in Disney’s Cajun restaurant  where it was called — ta da — the Monte Cristo Sandwich.  And here I thought it had been around since one of the King Louis’ or at least Napoleon!

Now forget that connection to French Toast.  Yes, you dip the assembled Monte Cristo sandwich into a similar egg mixture.  Unlike French Toast in which bread is allowed to soak up the milk egg mixture, a Monte Cristo gets just a quick dip to coat the bread.  Pick up the sandwich triangles by the tips of the long side, hold firmly and dunk.  Turn over and dunk the other side and place in the skillet waiting with  hot melted butter (or oil).  Adjust the heat so that the sandwich cooks slowly.  It will need about 4 minutes on each side to thoroughly heat the meat and melt the cheese.  You can also prepare this in an oiled grill or Panini maker—I’m told.  The bread is an important part; for best results choose an artisan bread.  The one pictured is Challah bread, light and soft textured with an eggy yellow color, but sour dough bread is also good.  The jelly served as a dipping sauce is a must.  Powdered sugar is optional.  A great hearty  dish that is also company fare!

Print
Prep time
10 mins
Cook time
30 mins
Total time
40 mins
Ham,turkey and cheese sandwich made heavenly by dipping in egg and milk before frying! Serve with a dusting of powdered sugar and jelly.
Author: Charlene
Recipe type: Sandwich
Cuisine: French
Serves: 3 sandwiches
Ingredients
Instructions
Nutrition Information
Serving size: 1 sandwich Calories: 323, Carbohydrates: 50 grams, Protein: 17 grams,
Wordpress Recipe Plugin by EasyRecipe
3.5.3217
Welcome to A Pinch of Joy!  I’m so glad you stopped by today!   Follow A Pinch of Joy using the icons on the teal bar at the top of the page so you don’t miss a thing!   I’d love to have your company on this venture!!  Share: if you found this helpful or inspiring please click one of the buttons below!  Your support of A Pinch of Joy is appreciated!