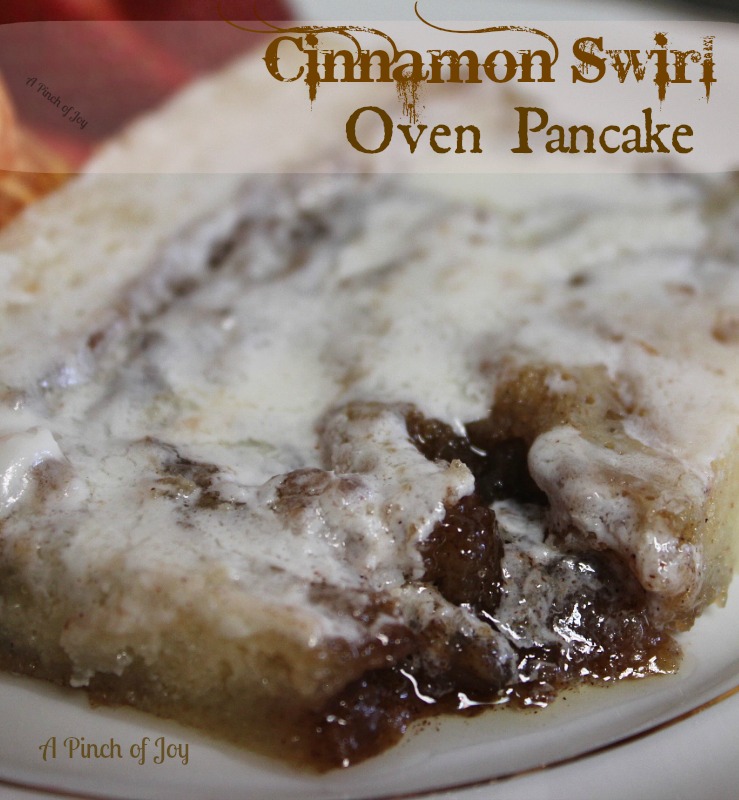 My sister in law Jan sent me this recipe a couple of weeks ago, saying she had taken a pan of this sweetness to a meeting at work.  It disappeared almost immediately.  In case you didn’t know, Wheels’ sisters are superb cooks.  They got it from their mom!  So I didn’t even blink – just made this recipe the next morning.  Tweaked it to make a second batch this morning and here you are!

Melt the butter for the topping in the microwave.  Add the brown sugar and cinnamon.  If you are not a fan of cinnamon like we are, you might want to reduce the amount by half a teaspoon. Swirl the mixture through the batter waiting in the pan. 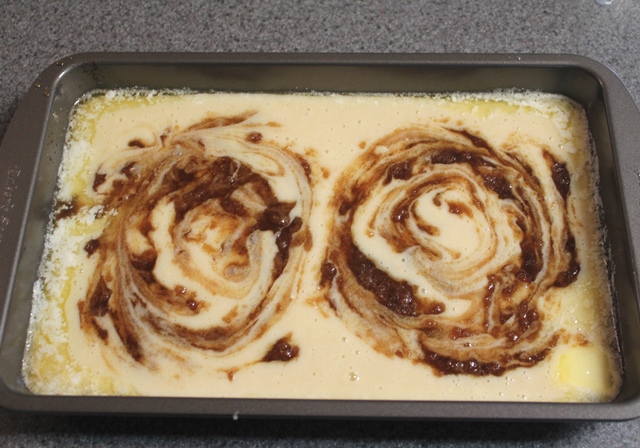 Make two swirls, one on each half of the pan. It’s easier to evenly distribute the goodness that way.    Jan said she made a double batch and baked it in a 9x 13 pan. You may have to add a few minutes to the baking time to be sure the center is done.  Whatever size you choose, the pancake is done when it begins to turn golden brown at the edges and pull away from the sides.

While I was tweaking, I also experimented just for you!  I made it with the melted butter in the bottom of the pan the first time.  The second time I used cooking spray.  Both worked well– but the butter added to the flavor and texture.  If you melt the butter in the oven as it preheats, check periodically because you don’t want the butter to brown.  I forgot the frosting the first time before I tasted it.  It was good.  But I was determined to follow directions for once so I added frosting even though the pancake had been out of the oven for a few minutes.  It was cool enough to allow the frosting to spread well, but warm enough that the frosting melted in.  And it elevated the flavor another notch!  Definitely need a bit of frosting. The second time I put the frosting on straight out of the oven.  It was hard to spread on the hot surface  and the sugar swirls pulled into it leaving it messy looking. I’ll update when I do this, but I recommend putting the softened frosting into a zipper plastic sandwich bag, snipping off the corner and drizzling the frosting on instead of spreading. You can control the amount and use less while keeping the flavor.  You won’t have to worry about spreadability or messing up the pretty swirls.  Plus it’s faster than waiting for the pancake to cool.   Important with everyone standing around drooling at the aromas and in anticipation of super yummy!

It is, as Wheels said, a sweetness explosion.  Serve in moderation.  Or not, if you have no worries in that direction.  We had a breakfast of scrambled eggs (protein) and fresh fruit and treated this as a dessert for our day off brunch.  Bytes hijacked the rest of the pan and poured a giant mug of coffee before disappearing into his office.  You could easily make it your whole breakfast as he did.  Whatever you do – prepare for knock your socks off good stuff!