A smidgen of topics today just because I’m still in a vacation frame of mind . . . something from our trip related to kitchen design — sort of;   a note about the Rhubarb Cherry Jam posted HERE and a reminder to change your reader.. . . 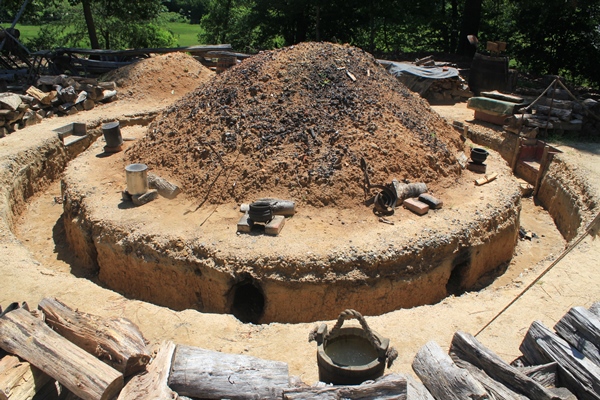 And you thought your stove was difficult to use!  An Army “kitchen” from the Revolutionary War as seen at Yorktown Victory Center.  Each six person tent selected one soldier to be their cook; each cook was assigned one of these cooking places.  The fire was built in the small holes, lessening the chance of setting fire to  the canvas tents with their straw floors and beds.  It also contained and concentrated the heat in the hard soil around and above the fire, making a very efficient stove.  The results were still less than appetizing because the available foods all produced a gray mushy soup.  They were also able to bake hardtack — basically flour and water baked to a hard state. The most positive thing to be said about that: It did not spoil unless it got wet.  Not at all appetizing either!    We visited Yorktown because Wheel’s ancestral grandfather, Christopher Hite, an illiterate baker’s son,  was a Continental soldier present when the English surrendered to Washington at Yorktown. 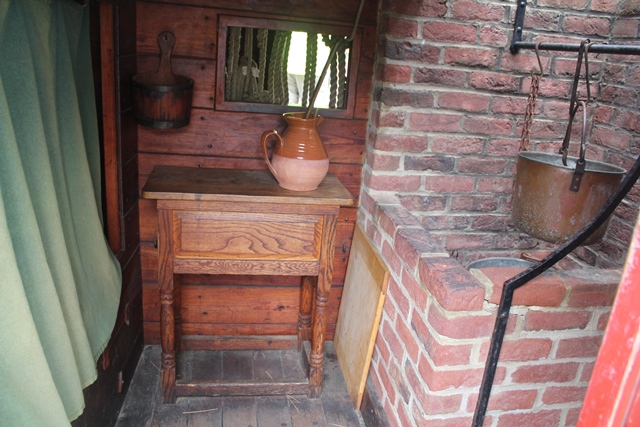 Convenience your top priority?  How about this kitchen replica on one of the three ships to arrive in 1607 at Jamestown.  The cook slept behind the green curtain, the washstand also served as food prep area and the fire was built in the brick box, where the cook could keep it going 24/7.  We visited Jamestown because my ancestral grandfather Thomas Savage arrived there from England at age 13 in 1608.  His mission was to live with the natives, to learn their language as it was thought that young minds could do that better than the elders.  He lived with the Powhatans, knew the real Pocohantas and negotiated many of the early treaties.  We were dumbfounded when we found this bit of family history a couple years ago!

After I posted the Rhubarb Cherry Jam recipe, I heard from family members that:

1.  You can change up the pie filling, to use strawberry or blueberry instead of the cherry.

(I’ll have to share Wheel’s mom’s wedding cake recipe soon — it is awesome!)

Thanks for meandering along with me today!  I’ll try to get back in the normal stream of things tomorrow–or the next day!