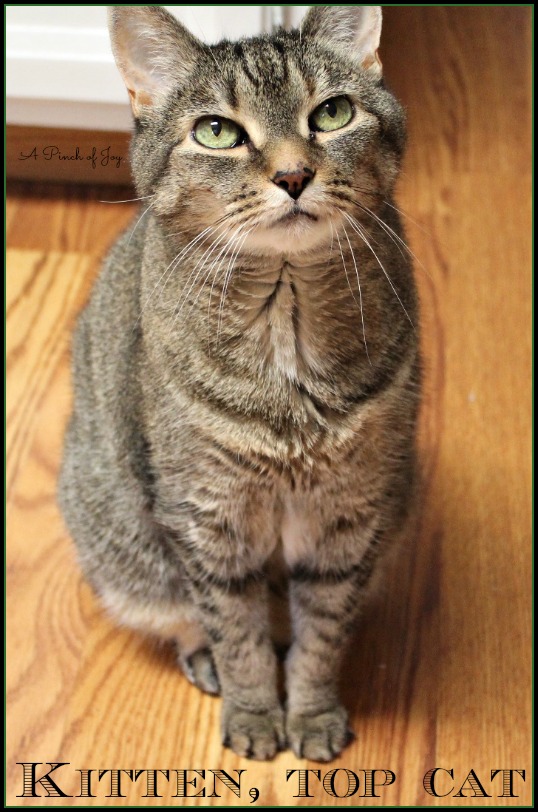 It’s time you met the other member of the family.  Kitten came to live with us when my brother and wife Deb were moving from New Hampshire to Arizona and stopped here on the way.

Kitten was snug in her carrier when the house settled for the night.  In the morning, the carrier was empty.  From the crawl space to the attic, from the kitchen pantry to the bedroom closet, five adults peered into dark corners, calling “Kitten, Kitten.”   We searched duct work and took down dropped ceiling tiles in the basement.  We repeated the search with different people in different places. Closets were probed, bedskirts lifted, furniture moved.    Once more, even expanding the search to the garage.  No answering “meow” to the call of “Kitten.  Kitten”.  No response to the pop of the top on the cat food can.

They had to leave.  Deb asked sorrowfully if we would mind having a cat.  Feeling her pain, we could only say we would take good care of Kitten.

Three nights we put out food and water.   In the morning the food was gone and the litter box visited.  We continued to search.  No cat.

On the fourth day, Bytes was at the desk in his office.  A gray cat strolled out of the closet behind him.  She stopped beside his chair, looked up at him, and jumped into his lap.

She is Bytes’ cat.  I am an accessory with a spoon or a brush for the morning feeding and grooming.  Wheels is the stepladder to the back of the living room chair that Kitten  claims as her perch when Bytes’ is out of her house.  Otherwise she spends her time on Bytes’ lap, laying in the chair beside him, setting on his desk or sleeping at his feet.

Except when she is ruling her house.  At dinner time, she is drawn by kitchen sounds and  gathers her humans to the  table by pacing ever smaller circles through the kitchen and dining room.  She targets the first person whose elbow movement indicates meat is being cut.  Patient for a few moments of intent watching, Kitten will begin to make her presence known with a tap on that person’s leg.  No response and she begins to reach higher and tap the arm holding the fork of meat.  The taps become more urgent until someone (Wheels, the softie)  gives her half spoonful of meat.  She wolfs it down and moves off, contented to rest until the next time these humans need direction.

Kitten likes to check out her environment.  She will stand by the dining room window sending out ESP directions.  Sure enough, some human will come along and move a chair into the patch of sun for her morning nap.  Other times she races down stairs to round up a pair of legs, urging them to follow her back up the stairs.  There she will make a beeline for the window in Bytes’ office, jump on the lamp table below it and wait for the human to open the window for better sight and smell.

Or she will stare at the back door until someone opens it, allowing her free run of the deck.   Sometimes she will doze for the better part of the day on a cushion.  Other times she is ready to come back in and go back out repeatedly . Half a day or half a minute, she heads immediately for her food dish for a treat.  We thought we were “training” her to come in when called.  She “trained” us to give her a treat every time she came back in the house, called or not.

She also “trained” us to come running when she yowled. You know, that deep throated sound that carries for six blocks.   It started one spring when she had eaten grass outdoors and yowled before regurgitating.  We all came running.   It wasn’t long before she started to yowl when she wanted the upstairs window open.  Why walk downstairs and search for legs to follow her when she could summon humans from all over the house from her queenly pose at the top of the steps?

She has an obsession with water.  Step out of the shower and exactly sixty seconds later, the bathroom door latch will pop and she takes a drink from the lip of the shower door.  Ten seconds later, she’s gone.  Leave a glass of water unattended and you know it will have had kitty nose and / or paws in it while you were gone.  Drink from a glass of water and she will sense it from the next room and come running to set at your feet until you give her permission to dip and lick water from her paws by setting “her” glass on the floor and pouring in some of your drink.  Take too long, though, and she will come to get your drink out of your hand with no apology.  She has crystal stemware next to her food bowl filled a couple of times a day with fresh water AND ice cubes.  And still demands we leave dixie cups full of water in the bathroom corners and a giant self watering apparatus in the basement.  Nothing too good for our princess!

She is a lady with exquisite manners.  She always says hello when someone comes into the room – a little meowy, growly sound.  If she is awake, that is.  Thank you is a more mellow and drawn out sound. She tells us where she is going and when she will be back, when the back door is opened for her — we think that’s what those sounds mean.   She rises when elders come into the room – especially if they have something she wants.  Banished from the bedrooms because of her nocturnal habit of seeking armpits and toes, she lies peacefully in the exact middle of the hallway until a door opens.  She says an affectionate good morning complete with ear rub (for her) before racing halfway downstairs, where she comes to a dead stop and stretches.  It’s a way of waking the unwary who may be following too close.   You wouldn’t want to find her feeding spoon half asleep, now would you?

Deb did find another cat in Arizona, two of them actually.  Plus another gray cat also named Kitten.  Still I feel guilty that our enjoyment of  the first Kitten came at the price of Deb having to leave her behind.   But not guilty enough to offer to take Kitten back when we visited them in their new home in North Carolina recently.  🙂

Do you have a furry member in your family?

Apples to Apples
Change
What is Joy?
Do not try this at home!
Great Blue Heron visits
Swedish Chef Popcorn shrimp
Lunch Conversation - traveling geckos
Five Steps out of Depression: How to find peace and hope again