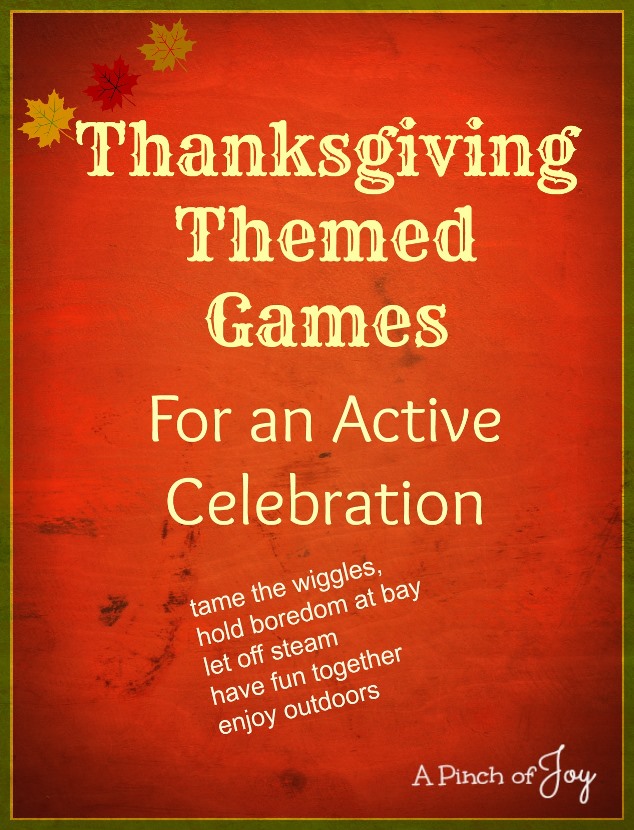 There are lots of Thanksgiving crafts for kids.  Case in point, Thanksgiving Kids Pinterest Board.   They are great and kids love to do them.  My boys were only good for so many coloring pages, board games, and projects.  There comes a time when a kid’s gotta move.  And so does a mom!  I was glad for the excuse of taking the kids outside because I wanted to move, too!  Here are some games guaranteed to get everyone moving and having fun!

You need  pumpkins and sturdy sticks, like a broomstick.  Racers line up on the starting line with the pumpkins turned on their sides. At the signal, racers use the stick to ROLL the pumpkins to the finish line. Pumpkins must stay on the ground at all times and hitting the pumpkin with the stick means losing a turn.

Tips and variations: Pumpkins  refuse to roll in nice straight lines, so this game need plenty of room!  Choose medium size pumpkins. The larger and more uneven the pumpkin, the more room you need. The smaller the pumpkin, the easier it is to control so if you must play indoors use small pumpkins!  Younger players may want to use their hands instead of the stick.  For larger groups, form teams and make this a relay race.

Divide players into pairs.   Give each pair a brown lunch bag and a handful of newspapers.  Have a stapler handy.  Each pair makes a turkey by wadding up newspapers and stuffing them in the brown bag, then having the leader staple the bag closed.  When every pair has a “turkey”, players line up at the starting line.  The leader points out the turning point some distance away.  It can be a tree (or a toy or a flower pot) that every pair must circle before returning to the starting line.  Then instruct everyone to stand beside their partner and lock  arms at the elbows.  One partner carries the turkey.  Each pair must complete the circle without dropping their turkey or unlocking arms.

Tips and variations:   You can try to match players  by choosing similar sized players for each pair.  This works well if your family is competitive. Or pair up the tallest with the shortest or oldest with youngest if your group is more collaborative.  If your group is artistic, you can have markers or crayons available for drawing a turkey on the bag before stuffing.   If you want to make it more difficult, tell the players they must carry the turkey together with the hands on the locked arms!   Or have partners stand back to back and lock both arms at the elbows!

Tips and Variations:  For a larger group of older children, have two Pilgrims.  Each one guides a different ship.  The ship must listen only to its guiding Pilgrim.  Start the second ship when the first is halfway to the finish.

Traditionally, a three legged stool was used for this classic game.  If you don’t have one,  you will need an object that can stand on its own but is lightweight enough that a ball can knock it over or move it from its place, like an empty plastic wastebasket, plastic yard chair, a large, but light weight outdoor toy.  Tape a turkey picture on it.  You will also need a soccer sized ball, and a strong stick or broom for this game.

Place the object in the middle of the yard.  One player, the goalie, is given the stick or broom and must defend the “turkey”. The others stand behind a line about 10 to 15 feet away. Each player takes a turn at trying to knock over the object by throwing the ball at it. The goalie uses the stick to bat the ball away. The one who knocks over or moves the object with the ball becomes the new goalie.

Tips and variations: Instead of a stick the goalie might knock the ball away using any part of the body except the hands. Another classic variation is to use a smaller ball and try to roll it between the legs of the stool or chair.  If a young  goalie needs a bit of an advantage, give them a broom instead of a stick.

Choose one or two Pilgrims, depending on the number of players.  The rest of the players are  “Turkeys”.  Pilgrims hide their eyes and count to fifty, while the turkeys run to hide.  Pilgrims shout “Turkey, Turkey” to start the hunt.  The hiding turkeys reply with loud gobbles from their hiding place (which, of course, helps the Pilgrims find them).  When caught players  go to a “Turkey Pen”, a designated spot to stand and gobble warnings to the other turkeys, who can remain silent after the first gobble.  When all turkeys are caught, another game begins.

For each team, you will need a bowl with about 1 cup of raw cranberries in each bowl, a tablespoon and an empty bowl or other container.  Divide players into teams and have each team line up one behind another.  Give the first player in each line a spoon with three cranberries in it.  They are to walk to the appropriate bowl across the room and deliver the cranberries without spilling them.  Then they go back to their team and pass the spoon onto the next player, who puts three cranberries in the spoon and sets off to deliver them to the bowl.

Line players up on the starting line.  Have them bend their knees deeply and place  hands under  armpits for wings. Move forward by jumping lightly, keeping their head high.  Hop toward the finish line, then turn and flap arms to “fly’ back to the starting line.

You will need a 12 inch dowel rod and about 18 inches of bakers twine or other firm cording for each toy.  You can make a toy for each player (or have them make them by tying twine to one end of the rod and then wrapping the rod with the twine for about half an inch to cover the knot, then taping over the twine to keep it from slipping)  OR have one or two toys that are shared.  Tie a loop about two inches in diameter in the free end of the twine.  To play,  try to catch the loop with the end of the rod, using only one hand. A Native American game.

You will need one or more broom handles or something similar.  And a rather long patch of snow at least two or three inches deep, preferably undisturbed and a little crunchy.  Players stand at designated line and throw the stick with a sliding motion.  Like an underhanded javelin throw  The idea is to see how far the stick will slide on the snow before coming to a stop.  A Native American game from the Iroquois and Paiute nations. 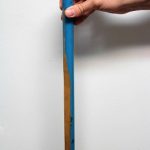 Bytes just informed me that is the purpose for this broomstick that has been in the corner of our garage forever.  Bytes and his brother made snow snakes.  The flattened side makes the stick go further!  This sport is still played competitively.  Google for more information!
Who knew????
Do you have a snow snake in YOUR garage?
I didn’t think so!