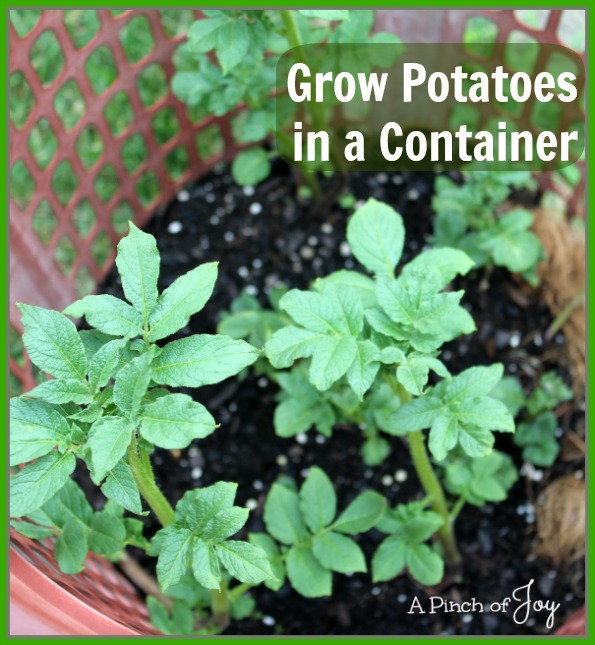 St. Patrick’s Day is the time to plant potatoes in much of the Midwest.  They will withstand the less severe frost of early spring — at least the usually less severe frost.  This year — hard to predict 🙂  My dad loved to garden and I remember his excitement at getting ready to plant potatoes because that meant spring was here.  Barring rain or blizzard — potatoes were in the ground in the middle of March as close to St. Patrick’s Day as possible.   Eventually the neighbor, also an avid gardener,  came up with a great labor saving method he’d heard about.  Save a spot in the big compost pile and just shove the potato eyes in the crumbly mix of organic material –near St. Patrick’s Day — and wait.  I was reminded of this when pins began proliferating on Pinterest claiming that you could grow one hundred pounds of potatoes in one container.  Wheels and I began the Great Potato Planting Experiment — just for you!   (Well, yeah, —- we’re curious like that anyway!) 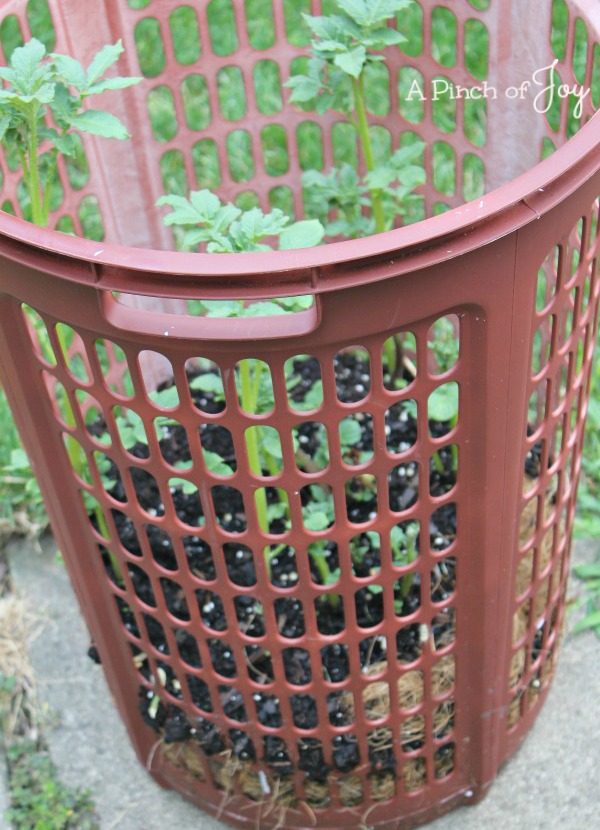 We looked around for a container and weren’t successful at finding any that we already owned.  They were too big, too bulky, too shallow, too heavy.  And of course none of them had drainage capability built in.  Then I saw this laundry basket at a discount store.  Just a bit over two and a half feet high, light weight, and tons of drainage.  So much “drainage” that I had to think a few minutes about how to keep the soil IN the basket.  Then I remembered the old coconut basket liners I had almost thrown away in the fall.  Eureka!  I exchanged three dollar bills for the basket (told ya it was a discount store!) and brought it home.  The only problem was that it was GLARING white — shouting across the yard white.  So I grabbed a can of leftover brown spray paint that indicated it (maybe) would stick to plastic, sprayed the entire basket in and out.  It “aged”* for a couple of days or more until we next had time to work outside.  (*Code for “let it set till we get back to it”.)

I lined the bottom — just around the outside where the holes were — with the coconut husk, cutting and tearing it into six inch wide pieces before tucking it in the laundry basket.  Wheels poured in potting soil to a depth of about six inches.  (You could use dirt / compost mix from your yard, but we have terrible yellow sticky clay instead of dirt.)  Then he inserted potato chunks about two or three inches down.  We used seed potatoes — Yukon Gold – and made sure that each chunk of potato had at least two eyes.  Grocery store potatoes are often treated to inhibit sprouting while seed potatoes are not.  Sometimes grocery store potatoes will produce long sprouts — but it is somewhat iffy as to how well those will produce.  If I’m spending time growing something, I want to up the odds of success — but that’s just me. 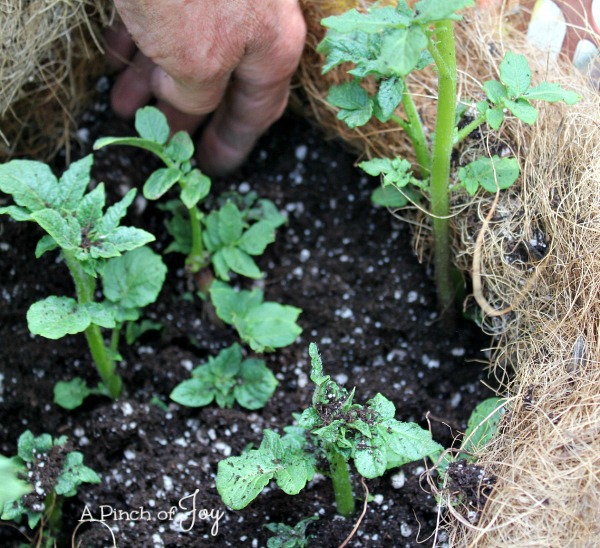 When the potato plants had grown about eight inches high, we repeated the coconut lining process and added another layer of potting soil.  Wheels also added another seed potato at this layer.  Again he cut the potato into fourths or about 2 inch squares, making sure each piece had eyes.  By now, the spring sun had “settled in” so we no longer had to move the basket to catch the most sun in our very shaded yard.  We had a spot that was sunny about 6 – 7 hours a day.  It wasn’t hot and watering was an every couple days thing — sometime less frequently than that if it had been rainy or extra cool. 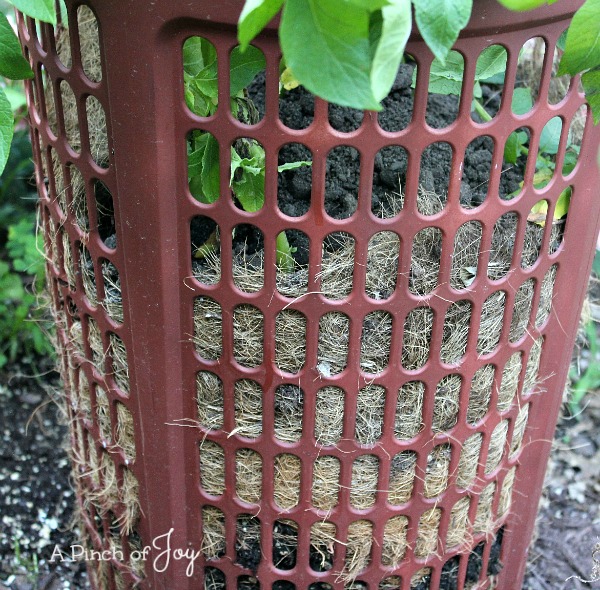 We added a third layer when the plants had grown about eight inches high again and continued to water as needed. 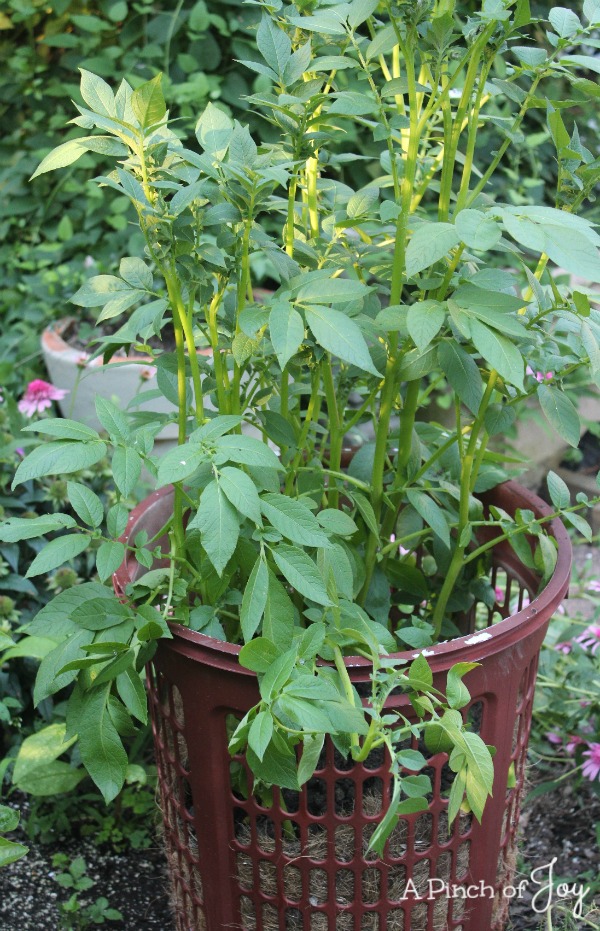 A fourth layer — I was running out of coconut husk liners so this was not as high on the outside, but it was “hilled” or mounded up a bit more toward the center of the basket.  It was getting hotter so we watered a little more often, just enough to keep it moist but not soggy. 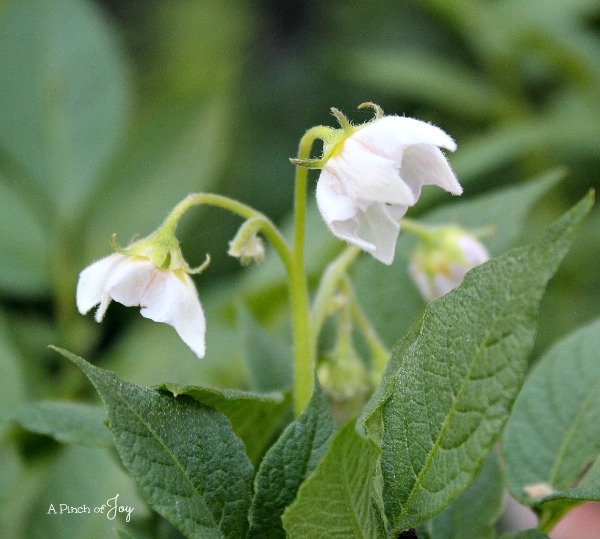 Blossoms!  We would have a crop.   During the next few weeks, the potatoes would grow lanky and then start to fall over.  They were ready to harvest, but we were gone in early fall so we let them stay until the first frost.
To harvest, we laid the basket on its side and raked out the soil. 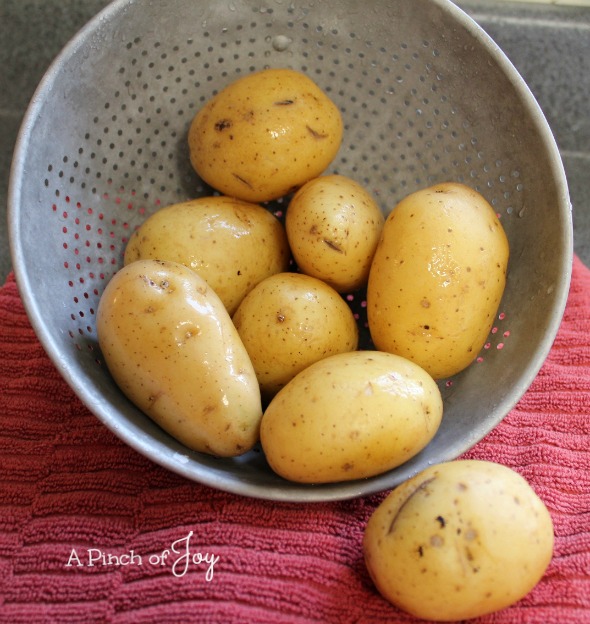 Some of our harvest — just about half the total number and by far the largest. The rest were quite small and I just cooked them like new potatoes with the skins on. Certainly not 100s of pounds of potatoes — but if you keep digging through the pins you finally see that it took a 10 pound bag of potatoes to produce a hundred pounds.  Not the quantity we need to eat or store over the winter months.  But it was fun and we’ll probably do it again and pay a little more attention so we can increase the yield.   A great way to celebrate the “green” holiday!
PS if you don’t know what a “potato eye” looks like — see the belly button kind of indentation on the far left potato?  That’s the eye.