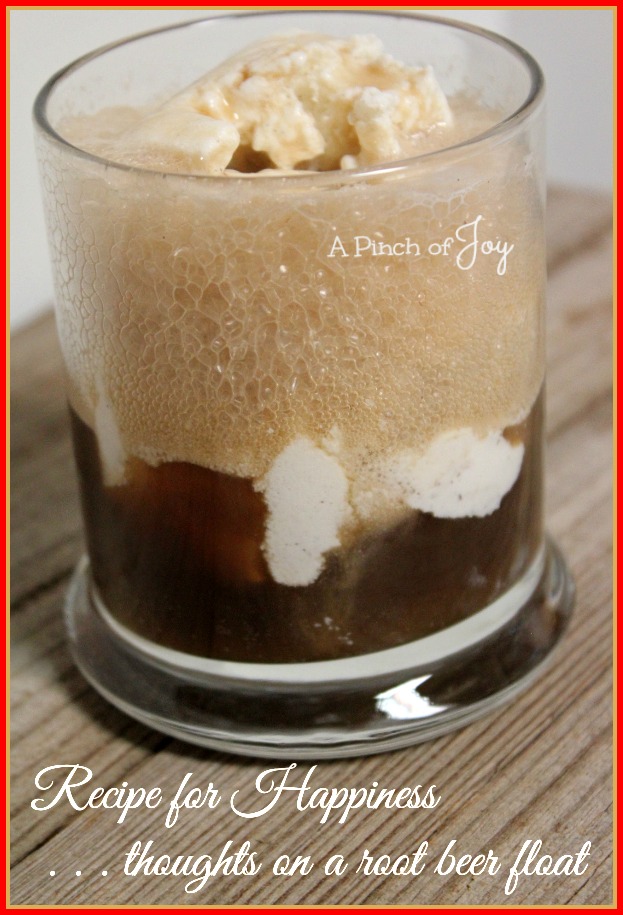 Wheels and I sat down one recent hot, steamy weekend afternoon for a rare root beer float. As I spooned the vanilla ice cream out of the fizzy beverage, I thought about the origins of a root beer float. Who was the first person to drop a scoop or two of vanilla ice cream in a glass of soda? Were they trying to come up with a new drink? Or was it just accidental?   How many different variations did they try before they hit on the smooth creamy vanilla with the bite and buzz of root beer?

For every recipe published here, there are half a dozen that don’t get published. Some are so standard that it seems a waste of time and energy to type it up and take it through the publishing process. But if it were new to me — would I publish a recipe for root beer float? Directions apparently exist. I hear you are supposed to drop the ice cream into the liquid. But I don’t — because I like to see it foam as I pour the root beer over the ice cream. And to see how tall the stack of foam will go before it starts to topple. And then add more. Playing with my food. . .

Other dishes I have made forever you won’t see published here for that waste of time and energy reason. I do try new recipes – sometimes just for variety and sometimes just for you! If they are new to me, I make them at least twice and more likely three or four or more times before publishing them. The first time, I follow the base recipe – unless I am out of an ingredient or I don’t like a particular spice or a combination of textures or I see a way to reduce the carb count. By the time I get to the third or sixth round, it’s my recipe!

Sometimes what sounds like a great twist on an old favorite doesn’t pan out at all. Like the Rueben burgers we had for dinner last night. Wheels and Bytes are great fan of Rueben sandwiches and “collect” them when they go to a different restaurant. So when I saw the idea for Reuben toppings on burgers, I thought “home run”.   Nahhh. Not a strike out, but barely a base run. The reaction was decidedly underwhelming. Swiss cheese, sauerkraut and Thousand Island dressing — spectacular on corned beef, ho-hum on a burger. Even when seconds were served on rye bread instead of a bun. I certainly won’t be publishing that one.

Would I publish a root beer float recipe? Well, I did use Carb Count vanilla ice cream. But when I bought the root beer I accidentally picked up the regular instead of diet. So any healthiness from the ice cream was cancelled and then some! I bought both on a whim and we enjoyed the out of the ordinariness of the mixture. If I were to hit publish, it wouldn’t be on root beer float recipe. Instead this is the recipe for happiness . . . do something unexpected, have fun, enjoy the moment, laugh with a loved one! It’s a recipe that’s in the public domain and available to all 🙂

Drive safely!
Take time for you . . . .
Back to school - celebrating milestones
Apples to Apples
Liebster Award and getting personal . . . .
Rocky the Cat
Great Blue Heron visits
Five Steps out of Depression: How to find peace and hope again