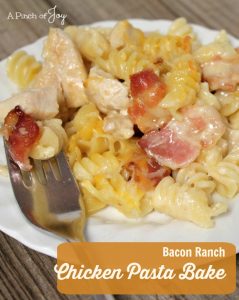 Bacon Ranch Chicken Pasta Bake --Soooo good you’ll want seconds – and thirds!  Everything goes together fairly quickly.  While you are preparing the pasta, you can also cook the bacon and then the chicken. I prefer to use thinner chicken breast cuts because they cook quickly and can be more easily cut into uniform pieces. Cut the bacon before browning, either with a knife on a cutting board or with a pair of kitchen shears. I always burn my fingers trying to cut bacon after it is browned! Roux is melted butter (or other fat) and flour mixed together. When the flour has been incorporated into the fat, cook just long enough for the mixture to turn slightly golden before adding the liquid. Cooking too long or over too high a heat will make the sauce lumpy. Better to prevent lumps than try to ... END_OF_DOCUMENT_TOKEN_TO_BE_REPLACED