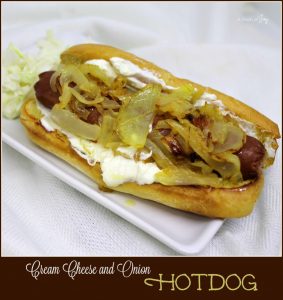 Hotdogs are not usually on our radar.  Not since I made octopus hotdogs for toddler lunches.  Now one toddler is 6'4"!   But when I heard of hotdogs smothered in onions on a bed of melted cream cheese -- well, it was time to give that a try!   Glad we did.  We'll do that again.  Serve with Sweet Slaw from cabbage grown by sister Bee. Wonderful!! Start with the onions.  A medium to large onion sliced thinly. Throw in the one piece not thinly sliced so it can be front and center in the picture - optional.  Preheat a smaller skillet with olive oil or butter, then add sliced onions.  Cook until they turn brown and soft.    In the meantime, cook a good beef hotdog, according to directions. Like -- put in boiling water until hot.  But the directions can be more specific so take a look.  Or ... END_OF_DOCUMENT_TOKEN_TO_BE_REPLACED