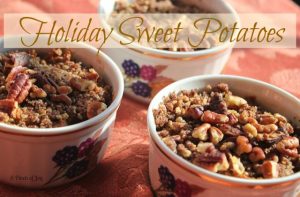 Rich tasting, topped with a crunchy pecan topping Holiday Sweet Potatoes are a great side dish for those special dinners.  No one will know they are a low carb option! Sweet potatoes are one of the oldest known foods, cultivated by Native Americans for centuries.  They were a major source of nutrition for early colonists – so very appropriate for Thanksgiving! --  and later soldiers during the Revolutionary War.   Often  called yams from a similar African tuber, sweet potatoes are much more nutritious.   They are an excellent source of calcium, vitamins A and C, potassium and manganese among other nutrients.  They are low on the glycemic scale and are often recommended to diabetics for blood sugar control.   There is an enzyme in sweet potatoes that converts the starches of the young ... END_OF_DOCUMENT_TOKEN_TO_BE_REPLACED