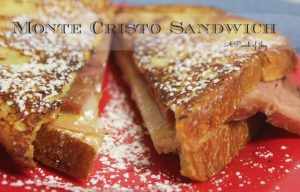 The Monte Cristo sandwich  is based on a similar sandwich called Croque Monsieuer –  basically a grilled cheese sandwich.  When it appeared in American cookbooks in the 1930’s, it was known as French sandwich.  Then someone came up with the idea of combining those two “French” dishes – French sandwich and French toast – into a Cheese Dream Sandwich. The idea of serving it with jelly came from the French Toast connection.  King’s Restaurants in Nebraska carried the idea further by deep frying the sandwich and calling it a Frenchee.  But it’s real claim to fame was in the mid Sixties when it appeared in Disney’s Cajun restaurant  where it was called -- ta da -- the Monte Cristo Sandwich.  And here I thought it had been around since one of the King Louis' or at least Napoleon! Now forget ... END_OF_DOCUMENT_TOKEN_TO_BE_REPLACED