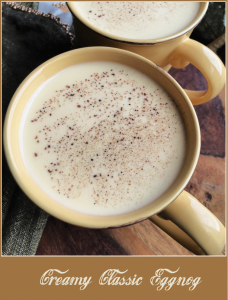 Holidays are made special for several reasons.  One reason is that we add a little "extra something" to our lives.  Food that is prepared just for that meal as in Thanksgiving.  Or food that is prepared for the entire holiday season.  Eggnog is so easy to make that it could be easily available all year around.  But then it wouldn't be special! Eggnog has been around for centuries. Milk, eggs and spices were mainly available to landowners.  Only they had the resources to keep cows and chickens and to buy imported spices.  Monks recorded the first recipes, and wealthy landowners were quick to adopt the habit of toasting one another's good health and continued prosperity with the unique drink served in small wooden cups called noggins.  Upstart English colonials brought livestock with them ... END_OF_DOCUMENT_TOKEN_TO_BE_REPLACED