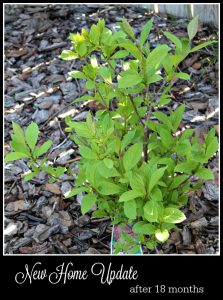 It's been a while since I last updated the changes we've accomplished in the new to us house.  Here's a quick peek at some of the things going on.  Like the new lilac on the east fence, we are growing where we are planted.  Like the plant, we don't quite look like the picture yet -- full of blooms -- but the promise is there and flourishing! Finally found some artwork to fill in the empty space in the front hallway between Grandfather Clock and the front door.  A garage sale in the neighborhood :-)  The price was right.  At first I thought it would be a placeholder, but it is growing on me for several reasons.  And yes, you noticed!  The wall color is different than what I showed you almost a year ago.   We've gone from Before to After to After II.   When everything in the hallway ... END_OF_DOCUMENT_TOKEN_TO_BE_REPLACED 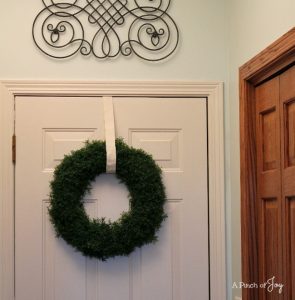 A new coat of paint -- well, several coats actually -- changed that shiny, yellow faux oak but really metal fire door between the house and the garage into this.  I love it!  Although it may get a darker, grayer coat eventually because it does get a lot of traffic.  We'll see how it holds up.  It makes the real oak wood closet doors look better too. Thanks, Chris, for the suggestion to paint the frame!  Lots more changes coming to this small space!   It's where we enter our home most frequently and is quite visible from the living area.  I see the wreath drifted off center -- We added four new cabinets to the garage for storage.  Second from right has painting equipment.  So glad to have it out of the house and organized!!  We topped the four cabinets with the three cubbies we ... END_OF_DOCUMENT_TOKEN_TO_BE_REPLACED 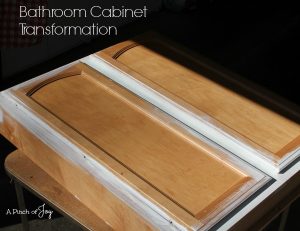 Introducing the bathroom cabinet transformation.   This spacious beauty has been setting in the basement for several months awaiting its turn.  It finally came!   And the best part . . . . It only cost $5.  Yes, five dollars!   We went to a church "garage sale"  and found this setting forlornly by itself with a little orange dot on one corner.  $5 the dot proclaimed.  I saw the potential immediately -- Wheels took a little persuasion.  Nothing in our house is maple, he said.  And my reply -- this won't be maple either.  When I explained that one this size and this quality with soft close doors would be many times $5, he began to soften.  Then I threw in the notion that I would use leftover paint for zero cost and maybe even gain space by emptying a can.   That sealed the ... END_OF_DOCUMENT_TOKEN_TO_BE_REPLACED

A chair rail adds interest and polish to any room, bringing instant character and definition.   The term may have originated from the Shakers who used rails with pegs to hang chairs so floors could be easily swept.   Many people think they are  intended to protect the wall from backs of chairs that were pushed up against it and they do sometimes serve that function.  However as far back as the Romans, wood pieces have been most frequently used to divide walls  for design and architectural interest. But how do you know where to place the chair rail on the wall?  Is one place better than another?  I am so glad you asked!!!!  Because there are answers. Ancient Greeks searched for mathematical formulas to determine the perfect number, perfect chord, and points of  perfect balance in ... END_OF_DOCUMENT_TOKEN_TO_BE_REPLACED 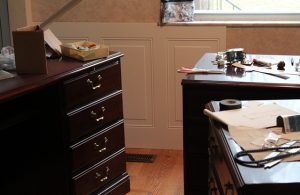 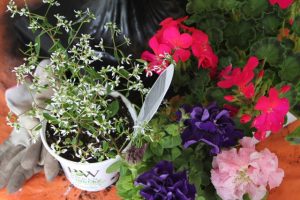 Finally in gardening Zone 5B it’s time to plant annuals.  And that means spiffing up the front entry way.  A good sweeping of the walk and steps.  Look for the planting urns in the topsy turvy potting shed.  In the fall, things go into the potting shed very orderly-- until after the first frost and then it becomes “add just one more thing” till the door scarcely shuts! Opening it in the spring is high adventure and moving the first few items is truly thrilling and may be even risky!  As soon as the pots came out into the sunshine, it was obvious a coat of paint was the first step. While it was drying, I made my way to a nearby nursery.  Red geraniums in a hot pink cast were first.  Don’t usually have much luck with petunias, but the beautiful ruffles in the pink and purple kept drawing ... END_OF_DOCUMENT_TOKEN_TO_BE_REPLACED