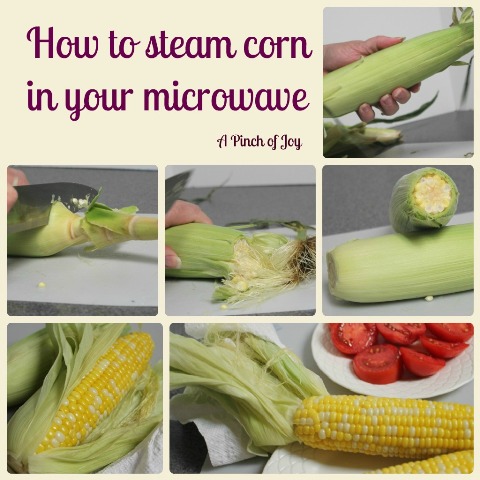 A while back I was picking out a few roasting ears from the giant grocery bin.  The woman next to me was furiously shucking her corn and loudly complaining because the store hadn’t provided a trash can for her husks.  I picked up the pile of silk and green discards she threw in front of me, over my hand and the ear of corn I was holding and said  “Corn stays fresher longer, if you wait to husk it until just before you use it”  She glared at me with baleful eyes and I braced for impact.

And then a sweet voice from her other side arose over the grocery din.  “I do even better than that,” a brightly dressed woman said.  The first woman glared at both of us then, threw her husked and bagged corn in her cart and huffed off briskly.   “Tell you what I do,” the other woman confided to me.  “I don’t even husk them before I cook them.”

Curiosity piqued, I asked how she managed that.   “Store them in the refrigerator until you are ready to cook your meal,” she replied.  “Then pull off the top layer of husks and discard them.  They are the ones that have gotten dirty from the field and from being handled.  Then break or cut off the bottom stem that was fastened on to the corn stalk.  Make the cut right up next to the cob.  Cut the top off too.  Just the tip and maybe the first three or four kernels of corn.  Don’t even try to get the silk off.  Put it in the microwave for 3 minutes.  Let it cool.  Stand the ear on its end – the one that was fastened to the stalk.  Take a clean paper towel and beginning at the other end, wipe all the husks and silk right off the ear!  Butter it and you have the very BEST corn ever.”

I tried it that night and haven’t looked back!  She was right!  At first, I cooked each ear by itself for three minutes.  Then one meal I impatiently threw two ears in the microwave for three minutes.  Perfect corn for two people in half the time!   A tip of the hat to the angry husker because otherwise I’d have just picked out my corn and would never have learned about Perfect Corn from the Perfect Stranger!  And  now you know the secret too.  Too bad Mad Husker missed out!

The BEST and easiest corn ever!