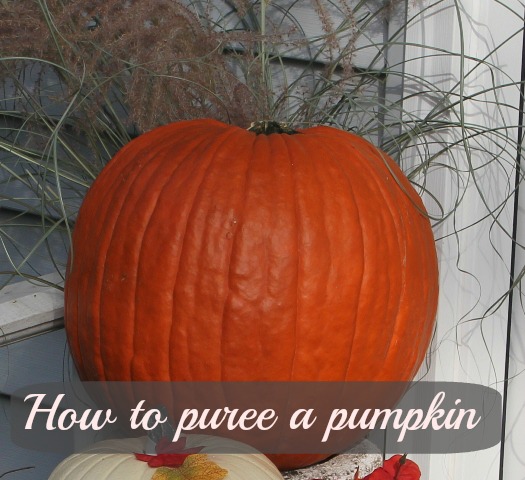 This big pumpkin has been on our front porch since early October.  Time to make the change to Christmas decor so it had to go.   Bytes has been the master jack o lantern carver, but was busy this year.  So this super large globe survived Halloween intact and went right up to Thanksgiving.   Nary a ding and only one surface blemish to mar its nearly twenty pound beauty.  Could not just throw it away.

You have to know, too, that Wheels has frequently worked on Thanksgiving.  Not every year, but often enough that we haven’t really established any traditions except a really good dinner sometime close to the fourth Thursday in November.  But this year, he was home.   And we had some time on our hands while the crockpot worked its magic with the turkey breast.  See where this is going??  This  is also about how we spent our Thanksgiving Day.  All day. 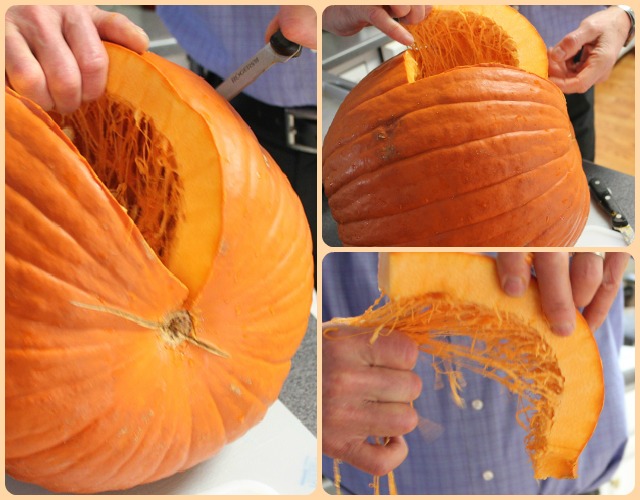 Step one — wash the pumpkin thoroughly since it will be cut and cooked with the skin on.  Wheels began by cutting around the circumference of the pumpkin at its midpoint and just about halfway around.  Then he began cutting wedges from the end of the pumpkin down to the cut at midpoint.  (He’s a lefty and has his own technique.  Don’t try to copy unless you are also a lefty and then you will know why he was cutting thataway!)  He was using his super sharp fillet knife.  But any sharp knife will work — like the big butcher knife  that is in the knife rack close by.   Pull the strings off the piece.  (They were not as slimy as I thought they would be.)

Wheels kept cutting wedges.  Because the pumpkin was so big, we reasoned we needed to cut reasonably sized wedges so that it would cook in a reasonable amount of time. They were 2-3 inches wide and 6-8 inches long.  And there were a lot!  He cut and cut and cut.  At the center, it was as slimy as I thought it would be!  But not in a gross way — if you handled them quickly and didn’t think about it.  I skipped all that and opted to let Wheels do it.  Just because it was Thanksgiving and I was putting together some part of our dinner.   He pulled out the seeds and we cleaned and roasted them — not terribly impressed because the seeds were small. 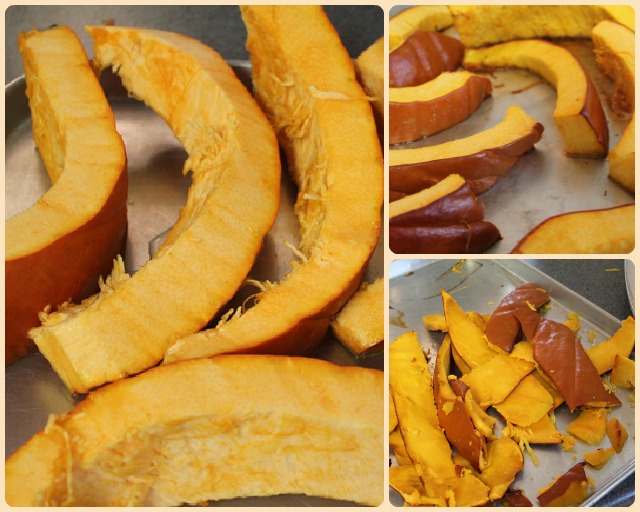 Wheels scraped the thinner strings off each piece, leaving just the firm pumpkin.   With such a large pumpkin we decided to cook the pumpkin in the oven, a process I saw explained at Cultured Palate.  It worked beautifully! I took a little different tack though by placing the wedges on jelly roll pans — three  pans full! — and pouring in enough water  to just cover the bottom to create steam as the pumpkin cooked.   I baked it at 350 for between forty-five minutes and an hour — until a cooking fork could easily pierce the flesh.   It took about 10 minutes before the pumpkin cooled enough to handle.  I first tried to scoop the pumpkin off the rind with a spoon, and then an ice cream scoop.  Unsuccessfully.  Grabbing a knife, I cut off the rind as closely as I could — which still left quite a bit of good pumpkin in the rind.  Try holding onto a very warm slippery wedge of pumpkin while artfully wielding a knife!  Wheels wandered back through the kitchen and began scraping the remaining good stuff from the rinds.  Been just me — those rinds would have gone.  But he has patience and made me laugh.  Its why I like doing things with him. 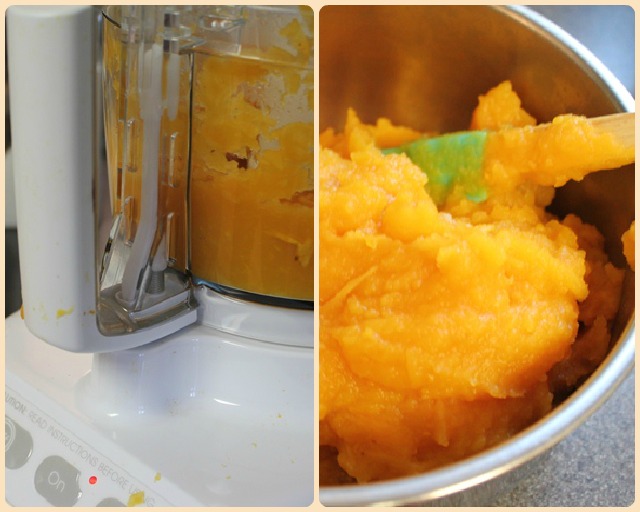 While Wheels was separating pumpkin and rind, I began the puree process, using the food processor.  Did I tell you this is a messy business?  I thought I had about half of it pureed and then stirred the bowlful of pumpkin.  Big chunks were hidden in there!  So back through the food processor.  You probably would know to stir each batch to make sure it was smooth.  Not just look at it.  I know that too.  Now.  It’s a beautiful color, isn’t it? 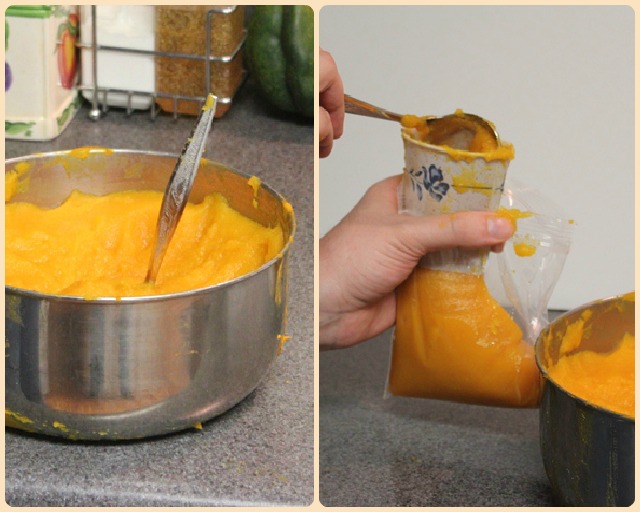 Pure pumpkin puree  is thick, too.  See that ladle standing up all by itself in the middle of the bowl.  That’s thick.  And we had two bowl fulls.  You know we had to freeze most of it.  I didn’t have freezer containers.  And by this time it was Thanksgiving afternoon.  I had this vision of bags filled beautifully colored pureed pumpkin, carefully measured in one cup portions.  Ha!  First to go was the carefully measured idea.

Fill the one cup measure and turn it upside down over the waiting freezer bag.  Nothing.  Not one drop fell out.  You have the bag in one hand and a full cup of thick pumpkin puree that is acting like concrete in the other.  Can’t shake the thick orange stuff out, can’t hold the bag and scrape the stuff out of the cup.   MMMkay.  I’ll just scoop some in the bag.  There was no way that stuff was going to go in a plastic bag.  There was more on my hands, the bag zipper, the sink, the counter than ever saw the inside of the bag.  Then Bytes wandered in and devised the bottomless paper cup funnel you see above.  Three ladles full made the measurements sort of consistent in each bag — even if we don’t know how much three ladle fulls of pumpkin puree really is. 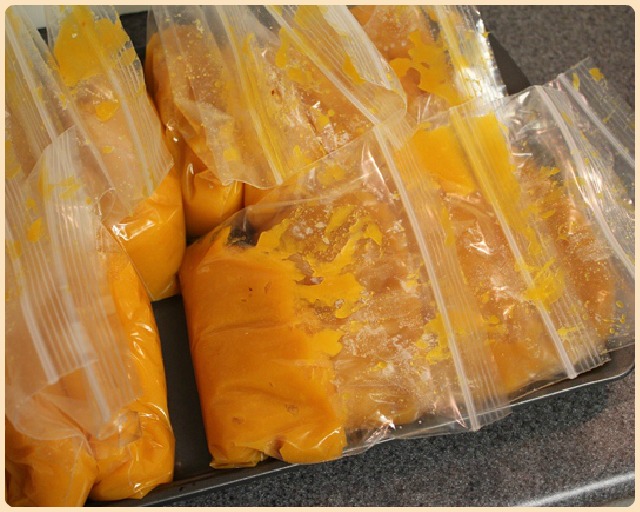 We ended up with sixteen bags of the finest pumpkin puree you will ever see.  Dinner was pretty tasty, too. And the kitchen was pretty much all clean again before bedtime.  The activity won’t become a Thanksgiving tradition at our house –who in their right mind cooks a big dinner and purees a huge pumpkin at the same time?! —  but we had fun working together.  And you can learn from our experience.   So all is well.

How did you spend Thanksgiving Day?  Got any pumpkin recipes??

I’m so glad you stopped by today!   Be sure to follow A Pinch of Joy so you don’t miss a thing!  I’d love to have your company on this venture!!   Follow:    Facebook /  RSS feed  / bloglovin’ /   twitter  and   pinterest.   Share: if you found this helpful or inspiring please click one of the buttons below!  Your support of A Pinch of Joy is appreciated!