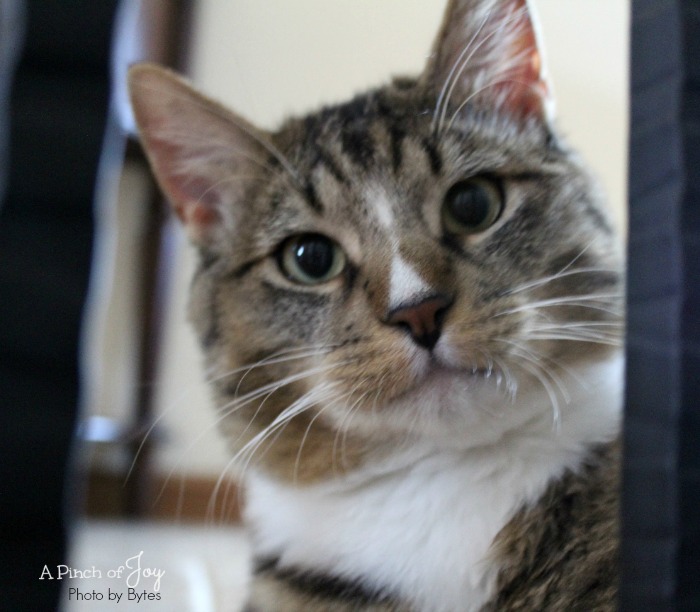 On Christmas Eve an apartment dweller called the manager and said, I keep hearing a cat meowing in one of the garages here, can you find out what’s going on?   So the manager trekked out, found the garage and rescued a small kitten.  He asked around, no one seemed to know anything about it.  Knowing someone moved just before Christmas, he assumed the kitten had been left behind.  Still he waited until after Christmas when people returned from family celebrations and asked around again.  No one knew anything about the little tiger striped kitty – including the people who used the garage where the cat was found.

His family took care of the little one.   Cheese was a favorite food, kitten was mesmerized by computer games and chasing after a ball of wadded up paper was great fun.  Unfortunately the daughter had an allergy to the visitor.  So mom posted on facebook looking for a new family for the frisky feline.

We’d had pet cats before.  When we moved to Ohio, we told the boys they could choose any pet they wanted since the yard was fenced.  At the pet store they were both adamant that the gray tiger striped kitten was the only pet that would do.  They named her “Mystery Shadow” because she would show up from nowhere as quietly as a shadow.   Then came Kitten, who had quite a story of her own.  We were already thinking of another cat, when things “settled down”  after our move.

After an exchange of messages, daddy and daughter brought over the kitten.  They thought it was around 4-6 months old because it was so small.  The cat reacted to the Roomba charging in the corner – and the manager knew the people who had moved before Christmas had one, as well as a cat.  Perhaps the cat had escaped during the moving process, found shelter in an open garage where that family was preparing for vacation and then trapped when they departed, closing the door.  The movers perhaps could not find their cat when it was time to leave or maybe they didn’t intend to take it with them in the first place.  Whatever the story, the little kitten was cute and curious.  Then I asked the little girl if she had named the kitty.  And the reply was “Her name is Mystery”.   Daddy told her, when she asked the kitten’s name on Christmas Eve, it’s a mystery.   So the cat became Mystery.

It was inevitable then.  With such a naming coincidence, there was no way we could say no.  Not that we were so inclined anyway!  We adopted Mystery.  And like the first Mystery, her name was shortened.  First it was Missy Too – since the first one was known as Missy.  Then it was just Missy.

Missy could not get enough to eat for the first few days.  She consumed an enormous amount of food.   And gained a much needed two pounds.  Her fur, short and rough, smoothed out and became silky.  She learned quickly; things like scratching on the intended box instead of the furniture or carpet.  Which earns her treats and praise to the point, she scratches three times on the scratch pad and waits, head tilted, until  served three treats.  Only when the third one, hits the ground does she deign to collect her reward.

As she continued to gain weight and grow, exploits took on super powers.  Standing in the living room, she’d spring four feet straight up.  Which meant she could jump on counters and backs of chairs.  It was noisy for several days until the spray bottle entered the equation.   Missy springs up to a high perch and someone sternly shouts, No, no.  Get down.  She  hunkers down in place and emanates defiance.  Out comes the spray bottle and she hunkers down even more.  Two squirts and she goes flying.  Lesson learned – humans must keep spray bottles close by.  She knows she is not supposed to be up there – but enjoys challenging the authority of those who determine such things.  Jury is still out on who will prevail, I think.

Her kitten play was on the rough side with claws and fangs. Missy would hide in corners and under tables, then spring out attacking knees ferociously.   Loud objections and the spray bottle helped.  But we also started offering more deliberate challenges for her and actively playing with her more frequently.  Once she got that attention, she was more willing to entertain herself.  Wheels dropped an avocado pit one morning and Missy snatched it up immediately.  She carried it around up and down stairs, batted it from one end of the tiled hallway to the other.  Then carried it into the master bath where she jumped into the tub, as is her habit, when anyone uses the mirror at the sink.  She dropped the avocado pit and shoved it lazily with her paw.  It moved up and around the perimeter of the tub.  Whenever it passed by her nose, she’d swat again and keep the avocado pit moving around and around the tub.  Now we deliberately leave dried avocado pits on the floor for her and any strange rumbling noise means she’s found a new use for it! 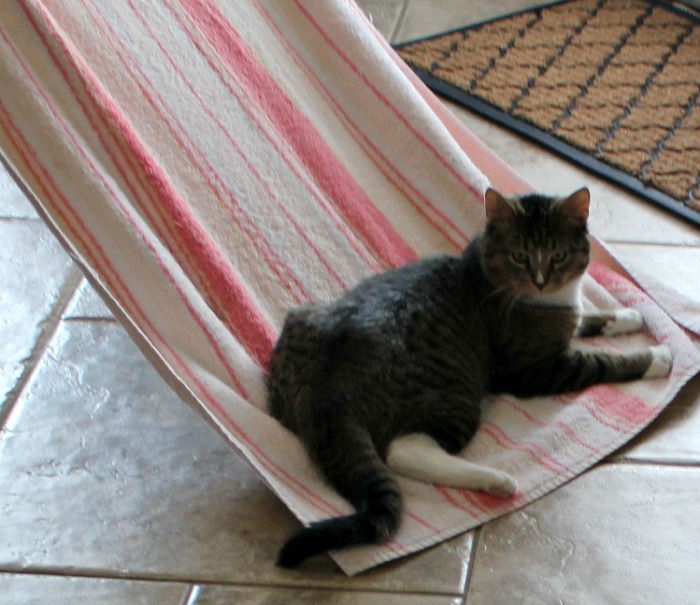 A visit to the vet for a check and shots was in order. She told us Missy was likely closer to a year old.   We talked about the rough play –still an issue though less frequent.  The vet told us we were on the right track but needed to offer even more challenges – maybe even hiding food.  So we took a couple of small boxes and cut holes just large enough for paws to reach in and snag things.  Her treats and small toys go in there.  She will work for an hour to get them out.  One hole is big enough for her nose but not for the entire head so she will shove the box all over the house with her nose inside.  Entertaining for her and for us!  However, it’s very similar to parenting an active two year old!  You have to keep thinking up new challenges, stay consistent and always a step ahead.

Then it was time for the spay appointment.  We arrived at the vet’s office at the appointed time, filled out the paper work for Missy and planned to return to pick her up the next day.  However, the phone rang after less than half an hour.

Yep, Missy is a Manny.

We okayed the other kind of surgery and Bytes and Wheels picked her – ummm, him – up that evening.

Over dinner, Missy was officially renamed.

Bytes had trained her – him – to come by yelling MissEEEEE with treats in hand.  This, in case you don’t know, is a very rare trait in cats  — to come when called.  It is also very handy when said cat has an affinity for the open door to the garage where there are zillions of hiding places.  So we tested names.  She – he – would come when Bytes called LeftEEEEEE but not Oliver.  That meant we were limited to EEEEE ending names.   Missy ran fastest when Bytes called RockEEEEEEE.

And that’s how we came to own a cat named Rocky.

How long do you suppose it will be before we stop calling him “her”? 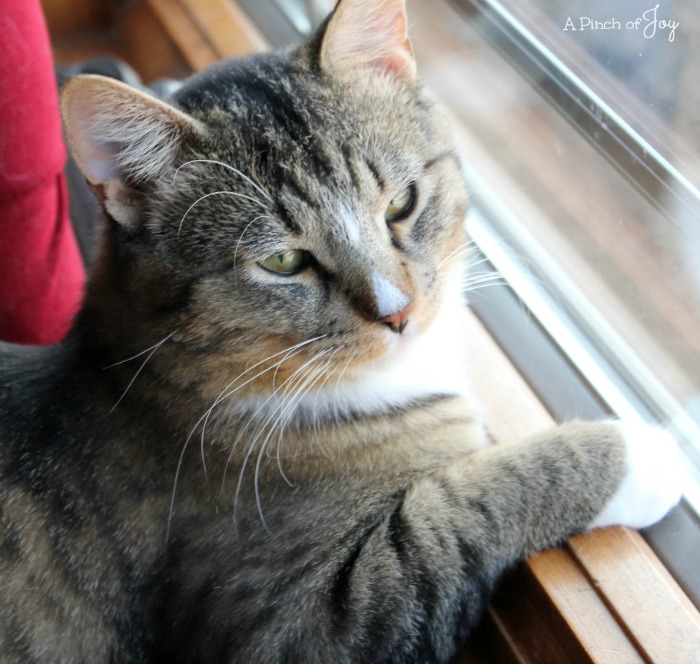