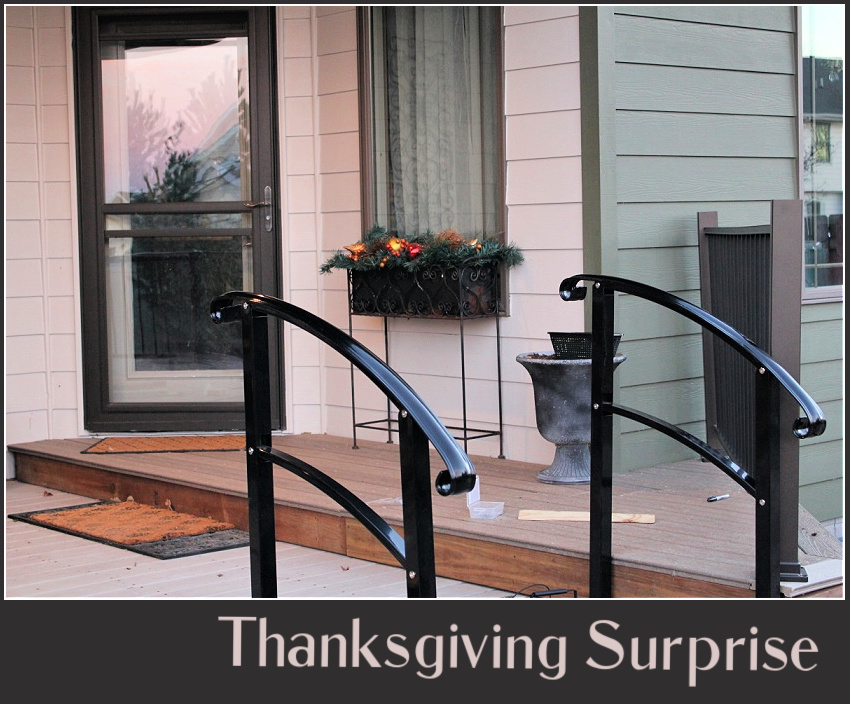 Sorry for the missing link party.  But there is a story of Thanksgiving behind it.  I usually do the linky party post Friday evening and Saturday morning.  The past week has been crazy with an overload of “needs immediate attention” things to manage.  We spent a quiet Thanksgiving catching up at home with “just us chickens” as Mom would say.  Friday things began to stir — just about the time I usually begin to visit your linked posts.  Saturday morning was going to be finish the post while the turkey roasted for us, two neices and families.  Instead, a carload of relatives pulled up in our driveway and then came another carload and another bunch and another person and a couple more.  Not to eat — but to help Bytes finish the deck project to make it safer before winter sets in. And to share other talents and necessary knowledge with us.  To support one another.  To laugh and enjoy time together.  To get acquainted with new members and re-acquainted with those grown up and in college.  To meet two year old Esther — the first of another generation.  The nieces, who were in on the happenings,  brought plenty of food to go with the turkey.  And many hands to make light work.  It was awesome!!!

Some people have bridges named for them, like the Bob Kerrey bridge that lets you walk across the Missouri River from Nebraska to Iowa.  Others have airports named for them, Dulles International  in Washington D.C. named for John Foster Dulles.   Or buildings, such as the Everett Dirksen Senate Office Building.   Generally someone from a previous generation or two.  This project is named for a relative named  Dian T., who is very much alive, well and a busy contributor to her community. She whispered in my ear as she left the family reunion gathering last August — you might want to put handrails on that deck.  My immediate response was to drop my jaw and think, absolutely right!  Why didn’t we realize that ourselves?????  The deck had narrow   steps on every side and nary a rail, plus there was a step down immediately upon opening the door from the house.   Currently in the first (and only) phase of construction, this deck will lose the outer steps, add another long and wide step to come out of the door, have railing added at the perimeter with only one place for stairs to the patio below with handrails on both sides of the stairs for use by all ages, stages and abilities. We christened it the Dian T.  Add a Handrail to That Deck Project.  Thank you Dian!!

It was a great Thanksgiving.  I hope you’ll forgive me for not getting the links ready!!  Next week, I promise.  Charlene