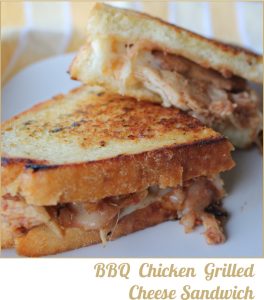 Grilled cheese sandwiches show up on the lunch menu, not frequently but regularly, at our house.  Barbecue chicken grilled sandwiches – a whole new level of lunch goodness!   It is also a very versatile recipe, easily customized to your family’s taste. Make your own delicious barbecue pulled chicken by following the steps above.  The sauce will cook into the chicken so your sandwich will have all the chicken and enough sauce to give flavor, but not drip.  You can make the chicken  ahead of time and refrigerate until time to warm and add to the sandwich.  (See note below.) I recently found out you can also buy packaged garlic butter.  If you can’t find it, make your own by stirring about half a teaspoon of garlic powder into softened butter (15 seconds in the microwave) until it is ... END_OF_DOCUMENT_TOKEN_TO_BE_REPLACED 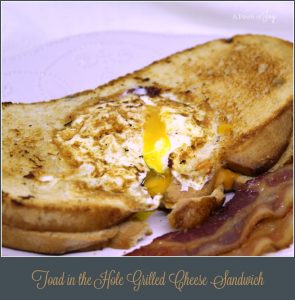 I’ve  wanted to make Toad in the Hole ever since I read a British children’s book that referred to it – maybe at age 11 or 12.  The name fascinates me!  Recently I saw a grilled cheese sandwich topped with Toad in the Hole.  What could be better than that?  One more check mark on the bucket list!! Toad in the Hole Grilled Cheese Sandwich   Print Prep time 5 mins Cook time 10 mins Total time 15 mins   Fun and delicious! Author: A Pinch of Joy by Charlene Vance Recipe type: Sandwich Cuisine: American Serves: 1 Ingredients For each sandwich: 2 slices sour dough bread 1 tablespoon mayonnaise 1 large egg 1 slice cheddar cheese 2 cooked bacon strips Instructions Cook bacon slices in small skillet over medium heat. While cooking, follow steps below. Using ... END_OF_DOCUMENT_TOKEN_TO_BE_REPLACED 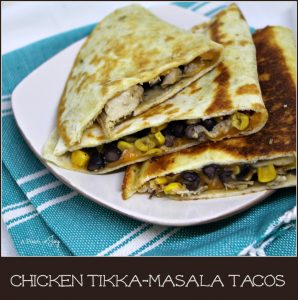 Tortillas filled with chicken in a tikka-masala sauce.  I was confused.  Is it from India?  Mexico?    Chapitas from India are similar to a Mexican tortilla, but are made from whole wheat flour with water, oil and salt.  The Mexican tortilla is made from refined flours (or corn) with milk, oil and salt. Tortillas are more readily available in US groceries.  So Chicken Tikka-Masala Tacos are an American adaptation of an Indian dish??  Sort of -- but there is that matter of the filling.  In India,  Chicken Tikka is usually a kebab, small pieces of chicken skewered and then roasted. In the UK, cooks skip the skewering part and cooks smaller bits of chicken in a savory sauce and call it tikka.  A British adaptation of India cuisine.  Only the masala part was left alone.  And, what is masala?  ... END_OF_DOCUMENT_TOKEN_TO_BE_REPLACED 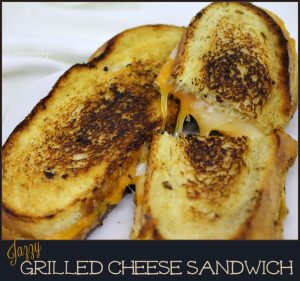 Grilled Cheese is a quick and easy lunch by itself or in combination with a bowl of soup.  A classic.  But sometimes you want something more than classic and the same ole, same ole.  Jazz up your grilled cheese sandwich with a little something extra and it soars to the next level.  Make it several somethings extra and lunch becomes legendary! To build this flavorful sandwich, use a good quality bakery bread for the foundation.  We like sourdough bread for its texture, taste and because it does not impact blood sugar as much as do other breads.  One of the groceries in town makes great sourdough in two sizes – a six inch diameter circle and an 8 inch circle loaf.  One slice of cheese covers the smaller loaf, but the bigger one needs a slice and a half  and sometimes 2 slices.  I just ... END_OF_DOCUMENT_TOKEN_TO_BE_REPLACED 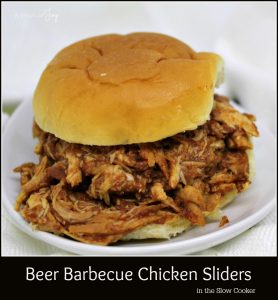 Slow Cooker Barbecue Beer Chicken Sliders are so quick and easy!  The hard part is when you start smelling that heavenly odor and know you still have to wait for it to finish cooking.  Make it the night before and let the chicken breasts marinate in the sauce overnight, before popping into the crockpot early the next morning.  It’s what’s for lunch! I served this on Hawaiian Slider Rolls, which are perfectly kid sized.  Or Charlene sized.  Though I did split one in half to share with Wheels so as not to leave any good thing behind.  For extra flavor, butter the buns and toast them in a large skillet just before adding the filling. This is also a good recipe to make ahead and freeze so you have one waiting in the freezer for those evenings you need a quick dinner.  Pop it in the ... END_OF_DOCUMENT_TOKEN_TO_BE_REPLACED 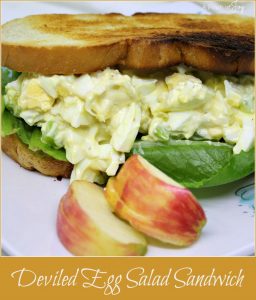 What’s for lunch?  Today it is Deviled Egg Salad Sandwich.  Egg salad is my favorite sandwich . This one has a couple of twist that make it special.  First, toasting the bread takes it to a new level.  Ordinarily I wouldn’t bother.  But since we are trying to treat ourselves nicely with what we have – staying at home and all --, I did.  And it was worth it!  The mustard and pickle relish add the devil to the egg salad for a tasty change. The recipe makes four generously filled sandwiches.  If you don’t need that many sandwiches, the recipe will divide in half easily.  OR make the whole batch, make the number of sandwiches you need.  One?  Two? Pop the rest of the egg salad into the fridge immediately, where it will keep,  tightly covered, for use within 3-5 days.  The best way to boil ... END_OF_DOCUMENT_TOKEN_TO_BE_REPLACED