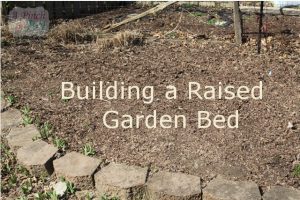 For ages we had planned to build a raised garden bed.  Finally the planets all aligned. Space  formerly shady is now sunny.  Plans were made. Saws found. Hopes ran high that finally we could have a garden that might produce more than a few random tomatoes. A garden in spite of heavy clay. We were going up – up – up! Up to 10 inches of black fertile soil, manure and compost.  We did it!  We figured out how to build a raised garden bed. Not just one, but two and a third one is in the works.  Here's how to build a raised garden bed  -- highlights version! We had measured the site earlier.  On the north end of our property is a raised area, outlined with a retaining wall.   Research told us that four feet is the optimum width for raised beds.  That would fit the site well, ... END_OF_DOCUMENT_TOKEN_TO_BE_REPLACED