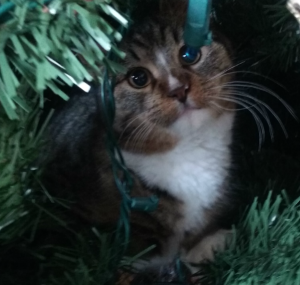 I joined the Vance household at the beginning of the New Year when I was just a handful.  The last humans I knew left me behind when they moved.  A nice man rescued me and found the Vances via facebook.  I was so hungry I ate and ate and ate for days.  And hid a lot. Then training began.  The Vances are learning, but they are so slow. They called me Missy.  Then I  went to a Doctor for a Checkup.  Rocky is a manly name that suits me better.  That tall Vance is  named Sure Shot because he has a squirt bottle full of water and there’s sure a lot of things he doesn’t like.  No sneaking up the back of chairs,no surprise attacks at the knee, no jumping on keyboards – his list of rules is long.   I’m coaching him – he needs to chill. Food Girl was easy to train.  I just stare at her ... END_OF_DOCUMENT_TOKEN_TO_BE_REPLACED