[P]art of the charm of square foot gardening is being able to better manage the quantity of each food produced in a small space. With three of us on erratic schedules eating from a garden, it’s easy to be overwhelmed with produce that needs to be eaten when it is ready to be harvested or it’s wasted.  “The plan” gave us an amount of food we could raise in a given area.  For example: Wheels likes radishes, I eat a few and I’m done for the year.  According to the plan we could grow 32 radishes in two square feet, and by planting a second time in a week or so, grow another 32.  In the meantime, where the first 32 radishes had been planted and harvested we’d plant another crop.   When things cooled down in the fall we could plant a third time in the first spot and grow another 32.  90 radishes for one person in spread out over a growing season sounded reasonable. 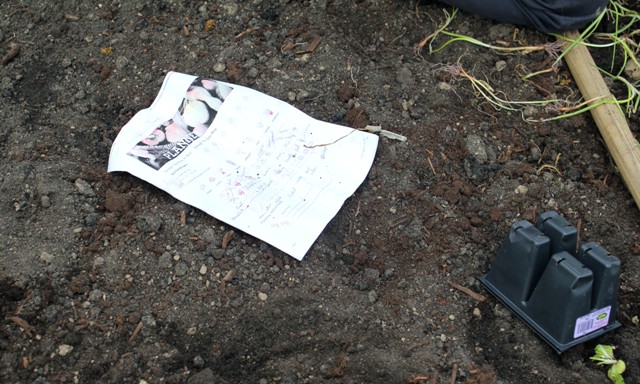 Let the record show – we are not gardening novices.  We both grew up knowing firsthand about vegetable gardens and our way around with the business ends of a hoe and a spade.  We’ve always had sizable flower gardens and dabbled in growing fruits and vegetables as time permitted.  Then there is Wheel’s grass farm.   (Try to sell lawn service at our house and you’ll hear oh! that’s a grass farm.)   A garden center is a very familiar place.

First we found a really cool watering system that just fit in the four foot square beds. On sale.  Marked way down from last season.  It’s made to go around a tree, but isn’t it just perfect here? 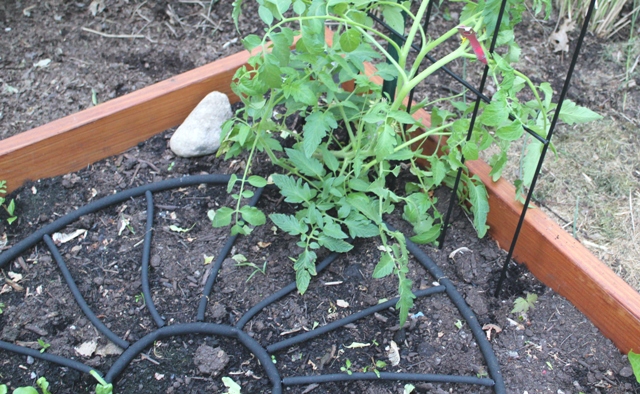 Then the seeds – you know seed tape would really be helpful.  We could cut it into one  foot pieces .  We didn’t notice until we got home that each package said in big letters “250 seeds”.  Or worse, “360 seeds”.  We did notice that a package of pea seeds had 100 dried peas – we only need a couple dozen.   Seeds don’t come in packages that small, so we purchased what was available, knowing the leftovers  probably would end up thrown away.   (I pretended I didn’t hear Mom Call’s  voice in my memory saying “waste not want not!”  And other such things.)   Next year:  Find someone to share seeds!

Then we went to the nursery area.  Hmmmm,  here are a couple of good looking tomatoes – an Early Girl and a Roma.  Okay, how about these two peppers over here. One square foot has been allotted to each.   And here is some lettuce already seeded and three inches high – red leaf, simpson and head.  They were on the plan – just in different quantities.  Oh and cabbage – we only planned for three and there are six in a pack.  Throw away three – are you kidding?!  That would be wasteful!!  (Mom’s best mom voice.)  And we wanted to try broccoli (or was it Brussels sprouts?) and there are six of those, also. And do you know how many onion sets are in a bunch?  Can you see where this is headed??? 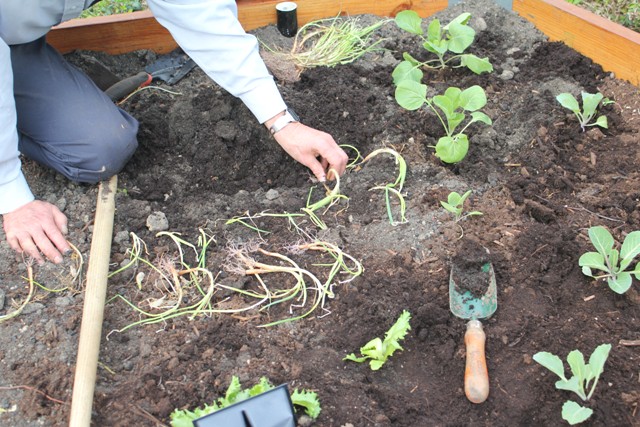 So we planted – more but mostly less, according to plan.  And we didn’t label anything – since we do know our way around a vegetable garden, you know.  unuh.   Now we don’t know which is Simpson or head lettuce (or how to harvest them).   And that broccoli (or is it Brussels Sprouts) is doing great!!!  Except that after “it”  was in the ground at three per square foot, we looked at the plan.   Both vegetables require one square foot PER PLANT.   I did an online search for the lettuce and how to harvest it.  We’re going to be surprised with Brussels Sprouts (or broccoli) and then we’ll figure out how to harvest.  Next year:  Refer to the plans as we plant!   Don’t buy plants that are unlabeled!  Save the labels and attach them to the plan!  Follow the plan! 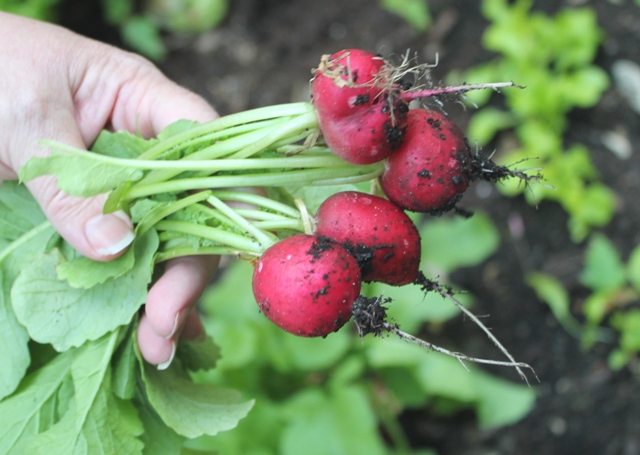 In the meantime, we missed the second planting in the radish section because of rain – and it’s a good thing since some kind of bug likes radishes really well. They look gorgeous on the outside – not so good on the inside.  Wheels has had a half dozen really good radishes out of the two square feet we planted.  The rest went in the compost.  Next year: learn about radish pests.  Discard the whole crop at the first sign of problems.  Doesn’t get better! 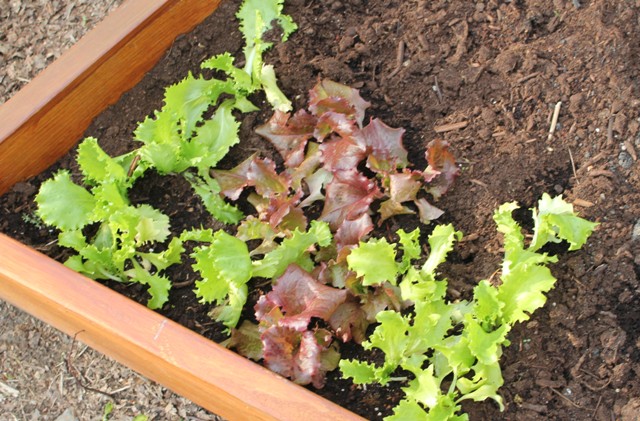 But we’ve had THE BEST salads out of this corner for three weeks now and it looks like they are ready to give us a second harvest before it gets really hot.  That was totally worth it!!  Next year: We’ll do that again.

Watch for updates.  In the meantime – don’t sign that Master Gardener certificate just yet!