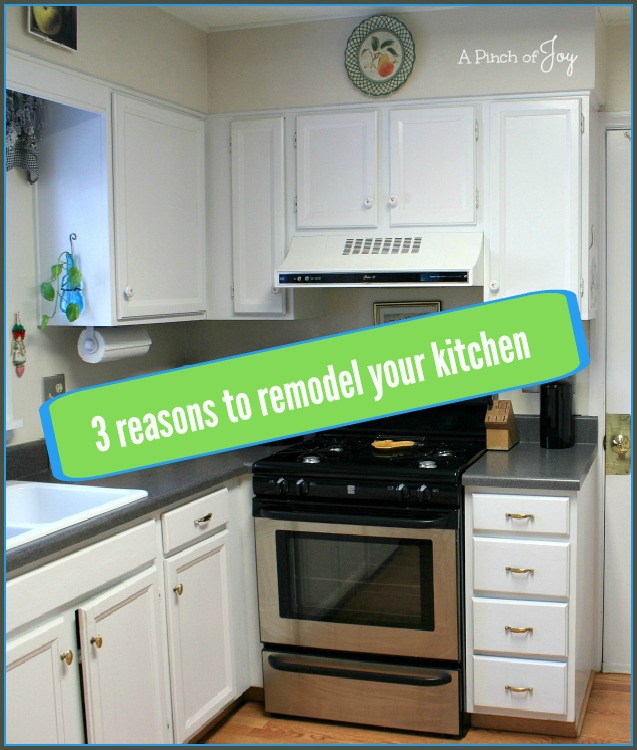 Below are pictures I used to show designers of the old kitchen and the problems I needed to solve.  Using pictures made it easy to compare the designs and to keep the focus on what needed to be done.  Improving storage is the number one reason given for remodeling a kitchen.  It certainly topped my list!  Improving functionality is a second major reason.  Our kitchen was built in the Seventies before microwaves became common in every home!  That’s just one change in lifestyle that has taken place since the neighborhood was built!   An improvement in appearance is a third major reason for remodeling a kitchen. 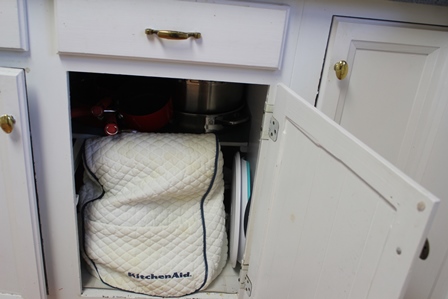 The Kitchen Aid mixer took up fully half of the storage space available in the peninsula! 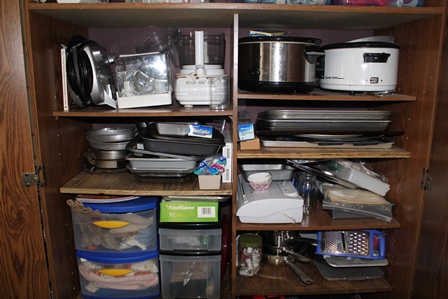 Some of the storage wasn’t even in the kitchen!  Cookie sheets, baking pans, crockpot and more were stored in the garage. 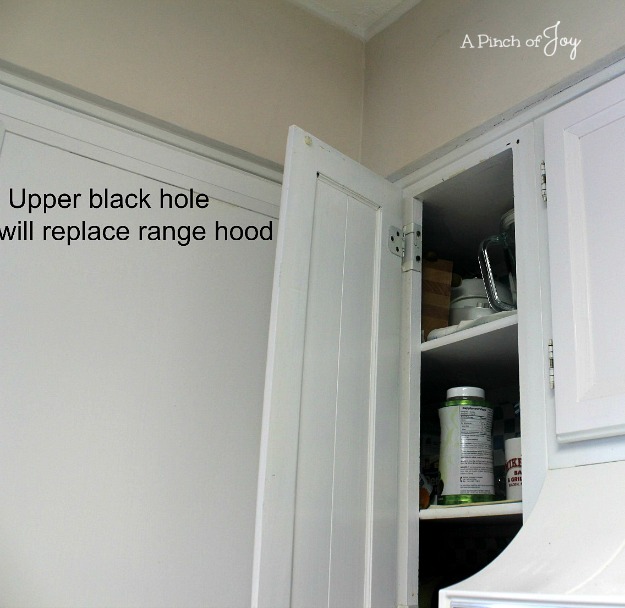 Some of the available storage was not accessible, like this blind corner next the kitchen range. 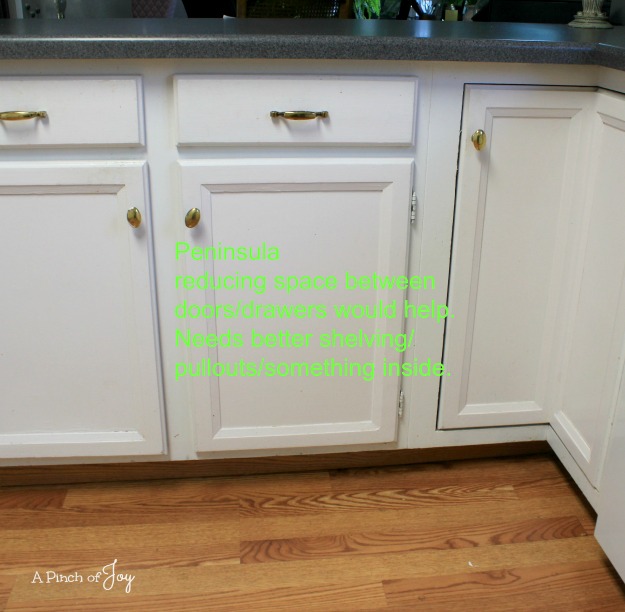 Behind the door with the writing is the Kitchen Aid mixer, pots and pans are jumbled on the other side.  The second shelf was only half the width of the cabinet and you could find a pan only by standing on your head while peering into the black hole. 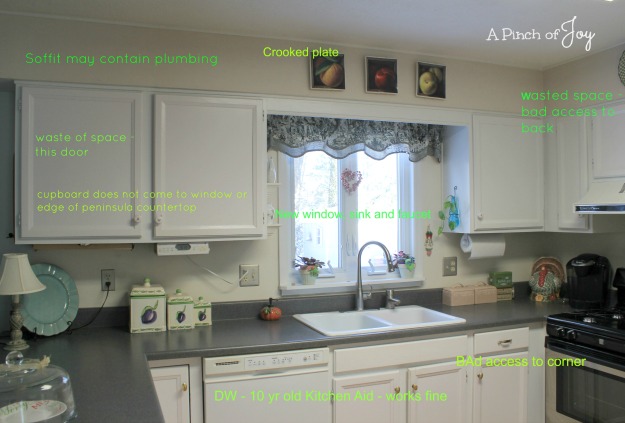 The upper cabinets especially did not make the best use of the space available.   The soffit did indeed contain plumbing — and heating and electrical.  It was stuffed full of utilities which meant it had to stay! The same was true of the soffit above the stove.  This limited  upper cabinet space to the existing height.  Sure, these pictures were taken in early February. Don’t you have the fall pumpkin hand soap setting next to the sink and a Merry Christmas plate on the cake stand in February? 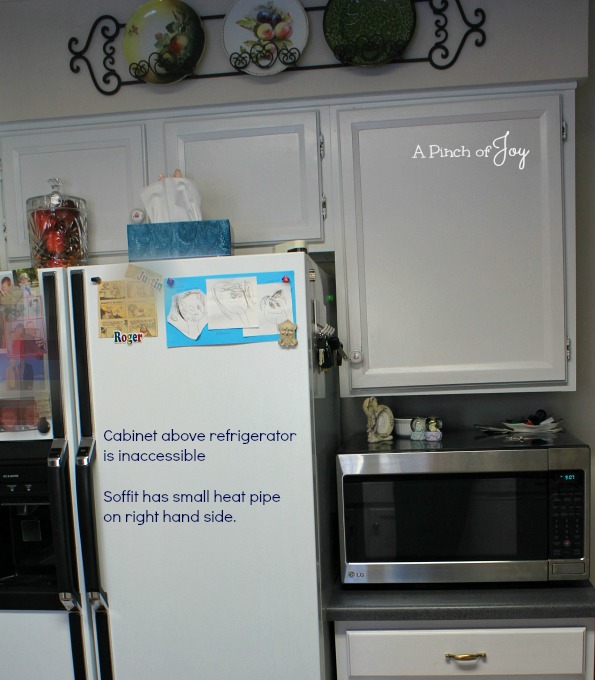 The cabinet above the refrigerator literally had an old coffee cup and two vases that were never used — nothing else.  It was such a pain to get to it.  The soffit had a four inch heat duct that cut diagonally across one end.  Straighten it out and the whole area was free.  We took out the entire soffit, which gave us lots of space and lots of options! 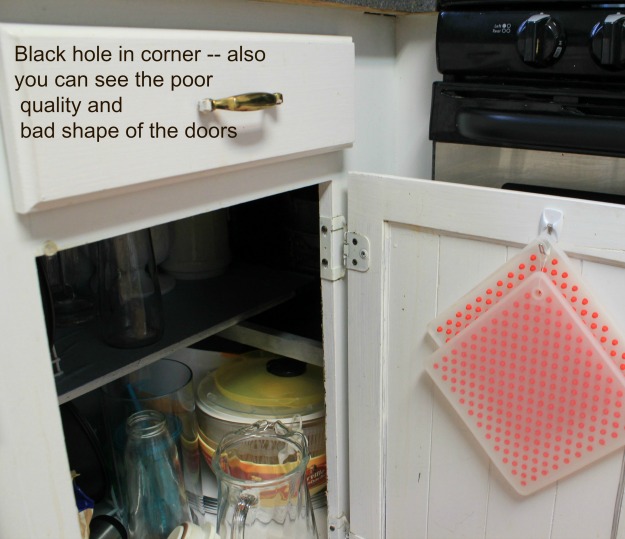 When we moved in these cabinets were a DARK brown and the grooves were on the outside of the door.  We flipped the panels around so the smooth side showed and painted the cupboards white.  HUGE improvement, but that was also a long time ago and doors were literally starting to fall apart.  (See that top shelf that uses only half the depth — not a good use of space!) 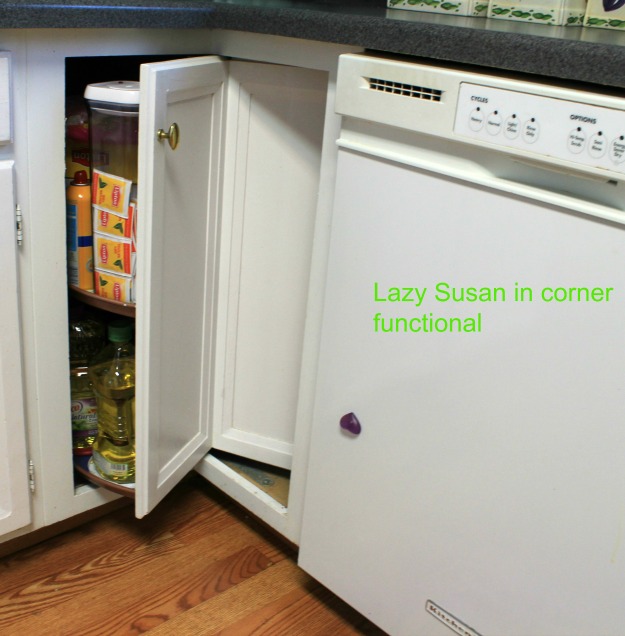 The lazy susan  was functional.  It was one thing that I actually liked about the kitchen.  Except when it was closed there was a good half inch gap all the way around the doors.  Note the dated hardware.  That was changed.  The  white dishwasher we kept — for now anyway. 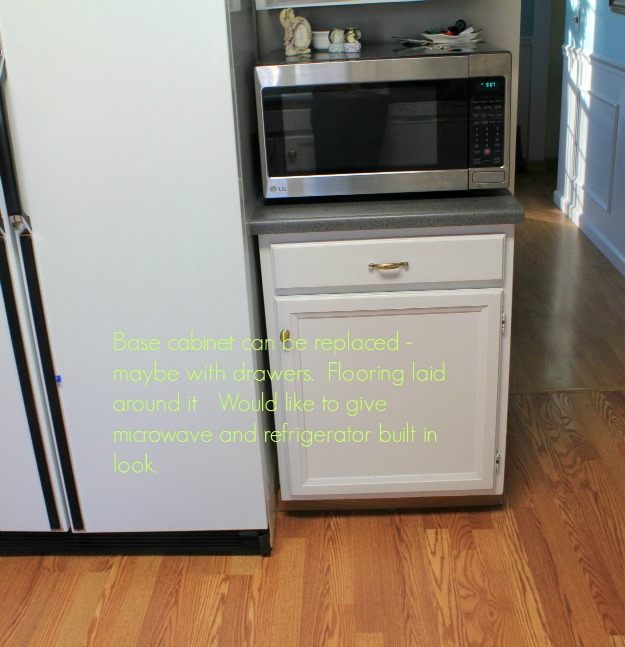 I wanted this wall to look like everything was built in from floor to ceiling, including the refrigerator and microwave. We came up with a different microwave solution.  Sometimes the criteria changes mid project — what can I say.  We also were keeping the Pergo floor that had been laid around the cabinets.  That meant the cabinets had to fill in the original footprint.  Keeping the floor was an easy decision because it was cost effective, the floor is relatively new, easy to take care of and we like it.  Keeping the same footprint was a struggle, because we had hoped to make some changes — for appearance, functionality and more storage.  The more we discussed,debated, drew and worked at things, the more apparent it became that  changes in the existing footprint were just not feasible.  We decided to stuff as much improvement as we could into the same space. 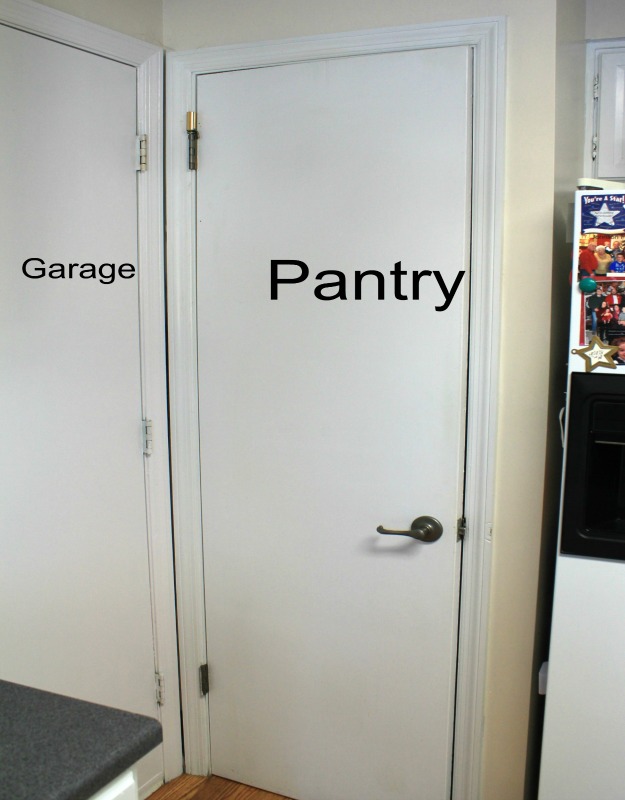 This corner was a major eyesore with functionality issues.  We discussed all sorts of changes here — again with no real solution for improving functionality without creating more problems elsewhere.  Improving appearance was a different story.

Next — how we solved some of these problems!

How to choose pendant lighting for your kitchen
New Home Update -- Week 22
How to choose color for your home - part II
$5 Bathroom Cabinet Transformed
Transition Kitchen: How to make do while your kitchen is remodeled
Busy Monday -- Busy Week
Choosing and installing crown moulding
How to make a large, lighted outdoor wreath