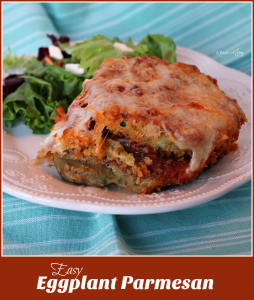 Eggplant Parmesan is a dish Wheels likes to order when we eat out.  This Easy Eggplant Parmesan is a similar version.  Actually, it came about when we were leaving a workout session a couple of days ago.  During the summer, people bring in excess garden produce and leave it on a table by the elevator under a “help yourself” sign.   We bring in tomatoes and leave with cucumbers usually.  But this time, while we were waiting, a woman walked in and laid fresh picked eggplant in the basket.  On impulse I picked up one just as the elevator door opened.  Wheels said hopefully, “Eggplant Parmesan?”   I ‘m still a sucker for those dark chocolate eyes – what can I say.  The eggplant came home with us. Peel the eggplant – just like a potato.  Slice into slices not quite half an inch thick.  Ours ... END_OF_DOCUMENT_TOKEN_TO_BE_REPLACED